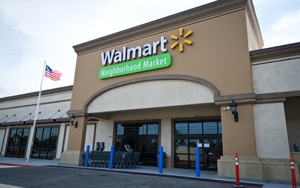 In a sweeping tactical change, Wal-Mart Corp. is pulling the plug on its Walmart Express stores, a concept it has been experimenting with for five years. Instead, it will focus on expanding its Neighborhood Market format. The move signifies just how much pressure e-commerce is putting on the retail sector, resulting in the shutdown of a total of 269 stores, said to be its biggest single announcement of closures.

And it’s a signal that the company is taking on a more unified effort to win with grocery-store customers, as shoppers increasingly find newer destinations for food shopping, including the fast-growing dollar store category, as well as more plentiful online options.

Dollar General, for example, has more than 12,000 stores with a small-store footprint that would be very difficult for Wal-Mart to replicate, points out Morningstar in a report analyzing Wal-Mart’s latest move. The closures will allow the Bentonville, Arkansas-based chain to put more resources into its e-commerce efforts, “especially on SKUs that the firm doesn’t sell in stores,” it says in its report.

“We continue to think that Wal-Mart’s small-format growth will be focused on 30,000- to 40,000-square-foot Neighborhood Market stores that offer a full assortment of groceries and pharmacy products,” the report says. “Growth of this format will allow Wal-Mart to better address competition from traditional grocers such as Kroger, Publix, Ahold, and Delhaize, which have been out-comping Wal-Mart in grocery for some time.”

Wal-Mart’s closures involve a total of U.S. locations, including all 102 Walmart Express stores, first introduced back in 2011. In addition, it’s also shutting 23 Neighborhood Markets, 12 Supercenters, as well as 115 stores money-losing stores outside the U.S. (Morningstar says the closures represent less than 1% of its total square footage.) And it will open 50 to 60 U.S. Supercenters in the fiscal year ahead, as well as between 85 and 95 new Neighborhood Markets.

Wal-Mart is hardly the only retailer that is struggling. The National Retail Federation says that the 2015 holiday retail sales missed the mark, rising 3% to $626.1 billion. Online sales gained a solid 9%.