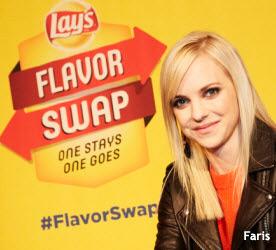 Building on the success of its annual "Do Us a Flavor" program, Frito-Lay's Lay's potato chips is adding another flavor-driven initiative, called "Flavor Swap."

The new program will encourage fans to vote at Flavorswap.com, between Feb. 8 and March 21, to determine which of four "classic" Lay's flavors will stay on the shelves, and which will be replaced by new flavors.

All eight flavors will be available in retail stores when voting opens. Voters will be entered for chances to win a $1,000 daily giveaway and a grand prize of $250,000.

Actress Anna Faris, star of the CBS sitcom "Mom," is the celebrity face of the campaign. During a launch event in New York City on Jan. 21, Faris sampled the flavor pairings, while consumers tried a "dual-room" experience that dramatized the dual-flavor standoffs.

Tina Mahal, senior director of marketing for Frito-Lay, confirms that Lay's will continue "Do Us a Flavor" — the buzz- and sales-building contest in which fans vote on which of several finalist flavors in stores on a limited-time basis should be made part of the standing flavor lineup, with the winning flavor's creator receiving $1 million and finalists receiving $50,000.

Asked about the thinking behind running both programs, Mahal tells Marketing Daily that whereas "Do Us a Flavor" spotlights fans who want to "create the next great potato chip flavor," the new program "celebrates fans who simply enjoy flavor and want to have a say." With "Flavor Swap," for the first time ever, the Lay’s brand "is giving fans the power to help shape the brand’s potato chips flavor lineup nationwide, while deciding which flavors go and which will stay on shelves," she says.

Any of the classic flavors that lose to new flavors in the voting will be "retired for the foreseeable future," according to Mahal.