The Automated Marketing Story Of Hitachi and Faction 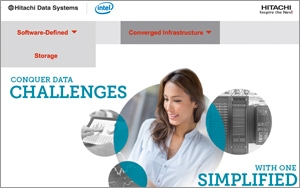 How can a global company target key decision-makers? Through profile modeling, automation and real-time marketing, of course.

Hitachi Data Systems and Denver-based marketing agency Faction collaborated on campaigns for two products in the past year: SAP and VMware.

Aaron Batte, founder and president of Faction, said the experience has been transformational for Hitachi, a large, global company with a somewhat traditional approach. Batte said entire campaigns are "pretty much automated," including tactical, online display, email and other channels. Read more on the data-driven campaign below.

Modeling Personas: Getting to Know the Decision-Makers
The campaign began with an assessment of the audience, mainly IT execs and senior professionals who are instrumental in making decisions about infrastructure and global accounts. "We're looking at folks who are moving from traditional IT structure to a more dynamic, converged cloud environment," Braney said. And Hitachi wants to be a part of that move.

Targeting large companies, Hitachi was interested in decision-makers at the top: not just CIOs, but entire B2B teams. There are usually six to 10 influencers in the purchasing committee, Batte said, and each has a persona. Using user data, Web data, third- party and second-party data, Faction used models for each of the personas, leveraging those personas to inform the campaign's direction. Some decision-makers might be more interested in pricing or competitive information, and others might be more interested in features.

Emails, newsletters, content and banners were all programmatic in terms of display, Batte said, and some assets could be created for a specific persona from a particular company. "In other words," Batte said, "Joe from Macy’s is checking his fantasy football score and all the sudden gets an HDS ad. He’s been researching [data systems], but hasn’t yet researched Hitachi. Now we can get in front of him with content."

Optimizing Content in Real-Time
Many B2B campaigns have typically used a "batch and blast" approach, Batte said, expecting a big spike in sales the following week. But that's not how this campaign worked. Instead, Faction's approach used engagement and triggered events.

Any ad that was served was based on real-time interaction with the campaign. For instance, perhaps someone in the target audience searched for "converged UCP [Unified Compute Platform]," but didn't click on the Hitachi Data Systems ad. The next day, the person could be shopping or surfing on CNN, and an ad for converged UCP could come up. "That ad was served based on one-to-one," Batte said. "It’s us looking for that specific individual. And that’s happening all the time, across all of our activated channels."

Additionally, Faction found that geo-specific content made engagement go up. For instance, when more specific content was created for a region, like Europe, instead of doing a straight translation of the content, the content was more relevant to consumers. Batte said it wasn't a "genius move," but it was one thing the agency did early on.

Engagement strategy went through different levels of progression, too. Braney said Hitachi Data Systems found people who didn’t make it through first stage of engagement in which they would get to richer content or a touchpoint. The team asked a few questions: Should criteria change? Are criteria too stringent for people to continue, or do calls to action need to change? Adjustments were made along the way, and it ultimately helped people become more qualified leads, Braney said.

What Comes Next
Braney said the campaign will transition from short term, time-based campaigns to a more long-term strategy, adding that the campaign will adopt an "all roads lead to engagement" strategy for the portfolio.

"Really, it’s the automated story," Batte said. "Because the campaign is global, the sun never sets on it. It’s always on, and it’s always happening."
programmatic, real-time, real-time web
Next story loading