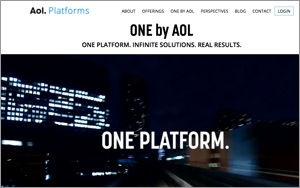 AOL is putting its publishing tools into one platform, One by AOL:Publishers. This follows AOL’s launch last year of One, a broader platform for its various programmatic ad technologies.

The company made the announcement Monday at the Interactive Advertising Bureau’s annual leadership summit.

One by AOL:Publishers offers a way for publishers to monetize their work using only AOL tools. The company will combine the individual publisher technologies that it has acquired, such as Gravity and Millennial Media, and rebrand them under One by AOL.

The platform consolidates the company’s portfolio of services into a single package that provides audience engagement, analytics, content distribution and revenue management. The new platform will focus on mobile and video products.

Publishers can choose to either purchase the whole advertising suite or select specific technologies on the service and connect them to other products of their choosing.

“It became kind of a mess to be honest,” Mahlman said. "The ‘aha’ moment for us last year was realizing that we have a billion dollars of acquisitions in AOL that are dedicated to publishers. Instead of selling them seven different products, why aren't we doing something similar to what the advertisers did and go to the publishers with one solution?"

Mahlman added that AOL wanted to provide a “consolidated story” with one pricing model.

According to Mahlman, with last fall’s acquisition of Millennial, AOL now offers a “true end-to-end stack” for online publishers looking to manage their ad inventory.

This complete package may seem like a lot for the average publisher, but the wholesale approach means lower overall costs for site owners because they can avoid the “technology tax” of paying for individual products from multiple partners.

One by AOL includes seven products, as well as supplemental a la carte options. However, the publisher suite does not provide a tool that deals with native advertising.

For now, the company is partnering with Taboola to provide those “Other stories from around the Web" ads at the bottom of articles.

AOL currently works with over 75,000 publishers, according to Mahlman. But the success of the platform will be measured by how many of those publishers use multiple products in One by AOL: Publishers.

"The target that I have from my boss ... is going to be measured by the amount of companies leveraging not just one but two, three or five products that are in our portfolio. That's a metric of how deep we get with our publishers," Mahlman told Business Insider.
aol, mobile, online publishing, online video, programmatic
Next story loading