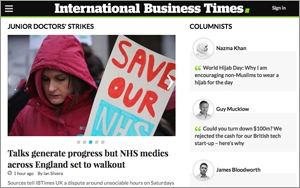 IBT Media moved the IBT UK video player higher up the page and integrated more video in articles to fuel this growth. The current base is around 60 million pre-roll impressions monthly.

Further enhancements are planned through IBT's membership of the AMP program, designed to make the mobile web as fast as mobile apps. Mobile accounts for nearly 50% of IBT.co.uk's global traffic and is a “crucial part” of IBT's strategy for 2016, per the company.

According to a statement, the new online redesign of IBT Media’s flagship brands focuses on “speed, legibility and user experience,” featuring content produced by the London-based editorial teams of both brands. Publishers Daily reported in December similar redesigns for the U.S. Web sites for Newsweek and International Business Times, which were designed to be more dynamic and optimized for mobile and video.

The site includes sticky navigation bars and social sharing. It features a digital treatment for premium magazine content for its viewers online.

The UK edition of the International Business Times Web site’s article pages will include a longer magazine-like format for feature stories, as well as a cleaner and simpler look for breaking news. Pages are optimized for mobile and video.

"The redesigns place ad effectiveness on a par with audience experience," stated Jeremy Makin, VP of sales for IBT Media, EMEA. He said the advertising blends harmoniously with the content and is "impactful, engaging and viewable."

According to Makin, programmatic revenues were up 85% year-on-year, with 200 million unique users on IBT.co.uk during 2015. He said the mix of ad options, programmatic, direct, display or native content, will continue.

After a partnership agreement was made last year, IBT Media has been working with MOAT to incorporate its new "sticky ads" technology into its redesigns, offering viewability scores in excess of 70%.

McAllester joined the team last August. Since then, he has been aggressively growing the EMEA teams. Publishers Weekly reportedIBT Media’s appointment of its first COO for the UK and EMEA to continue the company’s European expansion.

Greg Witham will join IBT Media in the newly created role on March 7. He will be responsible for overseeing the overall strategy and operations for the business in the UK and across EMEA.