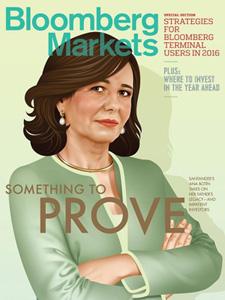 The relaunch aims to position the magazine as a “Journal of Global Finance,” focused on interviews with market leaders and thoughtful analysis drawing on Bloomberg’s other information and data services.

On the design side, Bloomberg Markets will boast a bigger trim size and higher quality paper stock. Every cover will feature a portrait of a key player in the financial markets, as captured by a noteworthy artists. On the editorial side, a lengthy interview with the cover subject will anchor each issue.

The new editorial approach also includes two new opening sections, “Surveillance” and “<Go>,” linked to the Bloomberg Television programs of the same name. These will be followed by another new section, “Industry Report,” with the tagline “Powered by Bloomberg Intelligence,” highlighting insights from the company’s custom research division, with each edition devoted to market like automotive, pharmaceuticals, energy, or technology.

Bloomberg Media head of U.S. financial ad sales Mike Dukmejian, said the company is providing a "thought leadership product by more closely connecting the magazine to the core business, and using a lot more insights and data and information that comes out of the mother ship that nobody else has."