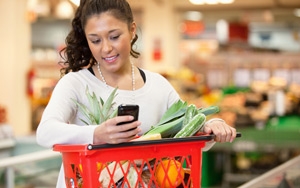 It’s been well over five years since the Great Recession upended the way America grocery shops, and many of those “permanent frugalities” are long gone.

But a new analysis from the Integer Group finds that the post-recession shopper is indeed a different creature: The rise of social media has made them three times more likely to ask others’ opinions before buying, and time-saving is emerging as the ultimate luxury.

The study, which tracks changing attitudes from 2009, also finds that people are much more focused. The number who routinely make lists before shopping has doubled, from 29% to 63%. And the value they place on their own time has increased sharply, with 52% saying their main goal now is to get in and out of stores as fast as possible, compared with 38% in 2009. And 36% say they are willing to pay more if doing so makes their lives easier somehow, compared with 21% in 2009.

Yet they’re still fiercely focused on price. It remains a top driver of where they shop. And 45% now say they seek out and use coupons, compared with 36% in 2009.

The study also finds a decided shift away from private labels and toward brand names, as people again have the free time to care more about what other people think. Increasingly, the Omnicom-owned shopper agency reports, consumers feel these choices define them in some way, with 28% believing that what they buy says something about them, up from 19% in 2009.

But they’re not blinded by labels, and in fact, are more skeptical about the benefit of buying brand-name goods. While 28% say brand names are “extremely important” — almost double the number who believed that in 2009 — they are less likely to think brands are any higher in quality, more reliable or more innovative than private-label goods. “There is clearly something intangible about buying name brands that makes shoppers feel better, more successful, or that they are better homemakers,” the report says.

“The value equation has gotten much more complex than it was five years ago. Although price is still king, it’s become more the cost of entry than it is a point of differentiation....shoppers look beyond price toward quality and other desired benefits from stores and brands. The definition of quality could vary from healthier to local to more artisanal to natural/organic, but shoppers are looking to stores to supply what their version of better is.”