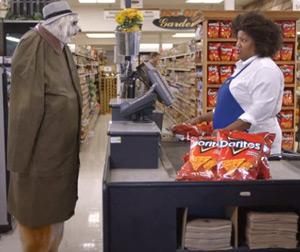 The comparison of Ad Meter results for two Crash ads was possible this year because the Frito-Lay brand opted to surprise Super Bowl viewers, contest entrants and brand fans alike by airing not just the official $1 million-winning Crash ad during the game, as expected, but also airing the first runner-up in the contest voting.

The Crash winner, “Doritos Dogs,” created by Jacob Chase and aired during the third quarter (shown above), ranked #4 on the Ad Meter, with a score of 6.49 (out of a possible 10). The contest’s first runner-up, “Ultrasound," aired during the first quarter, and pulled 6.61, edging out “Dogs” for the #3 Ad Meter slot.

Of course, the Ad Meter results — based on each ad’s average score as determined by the votes of more than 19,000 Americans who opted to participate this year (up 183% versus 2015) — have no effect on the official Crash results or the prizes for the winner and runners-up.

Peter Carstairs, who created “Ultrasound,” and David Rudy, who created second runner-up “Swipe for Doritos,” each get $100,000 and the chance to work on a future Doritos project. For the winning “Dogs” ad, in addition to the $1 million, Chase gets a chance to collaborate with director Zack Snyder while working with Warner Bros. Pictures and DC Entertainment.

The Ad Meter voting results for “Ultrasound” show it being just a tad more popular with men than women, and with those 50 and older, as compared with other demographics voting on the ad, but nearly equally popular among all income groups. “Doritos Dogs” got slightly higher scores among among women, and among both the 50-and-over crowd and those under 21, compared with other groups voting on it. Again, ratings varied little by income level.

The Doritos’ ads’ performance this year — the tenth and final year for Crash the Super Bowl — brings the number of Crash ads that have made the Ad Meter’s top five to a total of 15.

The Ad Meter scores for this year’s two aired Doritos spots were lower than those for the three Doritos Crash ads that pulled No. 1 rankings in the Ad Meter in previous years. The brand’s crystal ball-themed ad of 2009 had an 8.46 score; its “dog’s revenge” ad of 2011 tied for No. 1 with Bud Light’s dogsitter spot at 8.35; and its “man’s best friend” spot of 2012 hit 8.82.

Then again, the No. 1 and No. 2 Ad Meter ads this year did just marginally better than the Doritos spots: Hyundai’s “First Date” scored 6.91, and Heinz’s “Weiner Stampede” scored 6.64.

Furthermore, none of this year’s ads’ scores came close to the highest-scoring ads within the list of the No. 1-ranked ads in each of the Ad Meter’s 27-year history. The highest-scoring of all of those No. 1 ads was a 1995 spot in which a boy gets sucked into a Pepsi bottle, with a 9.66.