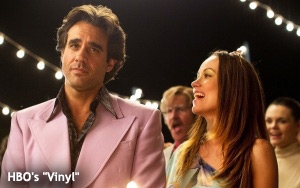 The same questions always arise whenever a new one of these period-piece TV shows appears: Who is the primary audience? Is it the people who were old enough to have experienced the era firsthand? Or are these shows for younger people who were not yet born, but who turn to them for a glimpse into eras that to them must seem like ancient history?

Perhaps these shows are supposed to attract both groups -- even if their experiences watching them are vastly different. The latest series to trigger these thoughts is “Vinyl,” HBO’s period piece about the record business in New York in 1973.

Premiering Sunday (Feb. 14), “Vinyl” was co-created by Martin Scorsese, Mick Jagger, author Rich Cohen and Terence Winter, writer/producer on “The Sopranos” and then creator of “Boardwalk Empire.” Winter co-wrote the two-hour premiere, which was directed by Scorsese.

As we have come to expect from these period TV shows -- from the 1920s of “Boardwalk Empire” and the 1960s of “Mad Men,” for example -- the devil is in the details. And like those two shows, the settings and accoutrements of the 1970s seen in “Vinyl” are rich indeed -- from the office furniture and the bell-bottoms to the cars and car phones.

The city too is re-created in all of its 1970s tumult and decay with street scenes that could have come right out of “Taxi Driver” (and maybe they were). Some people refer to the grittier New York of the 1970s as the “bad ol’ days,” but I’ve always preferred the word “poignant” over “bad” to describe those years.

That puts me in the category of older viewers for whom watching “Vinyl” is an exercise in nostalgia -- right down to the graffiti-covered subway cars and stations that will make you wonder how they re-created them. At the same time, younger viewers who have no history with the subway of those days will look upon them with astonishment of their own while wondering how on earth they came to be.

The principal storyline in “Vinyl” is about a record company called American Century, run by a brash, up-from-nothing former bartender named Richie Finestra (Bobby Cannavale). His wife is played by Olivia Wilde and his right-hand man is played by Ray Romano, who’s great in it (which should come as no surprise to anyone who has followed Romano’s acting career in the years since “Everybody Loves Raymond” left the air).

The central conflict in the story is the company’s pending takeover by Polygram, a much larger company based in West Germany. While the Polygram lawyers are poring over the American Century financial records, Richie worries that they will discover just how badly the company is faring.

He’s dealing with other pressures too -- temperamental artists, the artists’ managers, and at least one radio station mogul (played by Andrew Dice Clay) who is threatening to cut off all airplay for American Century’s artists.

With the voice of Cannavale providing expository narration at several points, the two-hour premiere of “Vinyl” has a “Goodfellas” feel to it -- which is a very good thing. It indicates that “Vinyl” has more than enough strength to go the distance.

When it comes to reproducing an era -- the early 1970s (with flashbacks to the ’60s), Jagger knows the music business, Scorsese knows New York and Winter knows how to write and produce a high-quality show for HBO, which once again has apparently opened up its corporate wallet and given the creators of “Vinyl” everything they apparently needed to make this TV show.

The result is a fine production all around and more to the point, TV’s next great show.