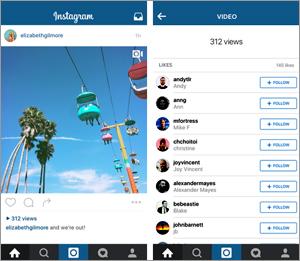 For Instagram, the change is part of a larger effort to engage video creators and brands in particular.

“Instagram is beginning to test video view counts, and will roll out to everyone over the coming weeks,” a company representative said on Thursday. “It will also extend to ads.”

The first brands to test the longer ad format include T-Mobile and Warner Brothers, which is promoting its new comedy, "How To Be Single." T-Mobile’s ad -- a shorter version of which is slated to run during the Super Bowl -- features a satirical behind-the-scenes look at Drake’s “Hotline Bing” video shoot.

“It's a long requested feature in our community and video views help share the depth of engagement videos receive,” the representative added. “We believe views are the most relevant way to measure people engaging with video -- and it's a widely expected metric.”

On the popular social platform, a view on Instagram is at least three seconds.

Brand Networks, for one, recently saw ad impressions on the popular platform rise more than 13-fold from 50 million in August to 670 million in December.

In part, Instagram’s ad surge can be attributed to its decision to offer its application programming interface to outside parties, last August. With the change, brands and their developer teams were invited to plug their software directly into Instagram’s API.

By next year, Instagram’s ad revenues will grow more than four times in size to reach $2.39 billion, according to recent estimates from eMarketer. By then, the mobile-first social network should represent nearly a third -- or 28% -- of Facebook’s total mobile ad revenues.