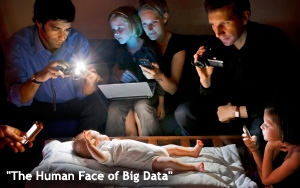 “If you vote for me,” Pedro famously said in the 2004 movie, “all of your wildest dreams will come true!” It was a Hail Mary pass of a campaign promise -- something so ridiculous and over-the-top that it could never be fulfilled. (He won election as school president on it, though -- aided by Napoleon’s famous dance routine.)

It was a promise not unlike the claims made by a series of talking heads in this PBS documentary called “The Human Face of Big Data,” which premieres next week (Wednesday, Feb. 24). I watched a screener earlier this week.

In this one-hour show, underwritten by Cisco and SAP (a German software company), expert after expert promises that if we all simply agree to allow data about ourselves to be released into the cybersphere, then the data can be used collectively to head off epidemics, make buses run more efficiently, get potholes filled and ensure the survival of premature babies.

I get it: They’re saying that the technology exists today to produce information about almost anything in real-time and in great quantities and then, perhaps more importantly, analyze it and apply it in ways that were not heretofore possible.

Thus, goes one example in the show, if enough cars are outfitted with sensor devices that can record irregularities in road surfaces, a city government agency with access to that data will be able to learn about an irregularity such as a pothole and then instantly dispatch a crew to the location to repair it.

This is what I love about visionaries: They really seem to believe this stuff. Meanwhile, here in the real world, a city agency can receive 20 phones calls in an hour about a large and axle-breaking pot hole on a city street and a crew won’t get dispatched there for three weeks if you’re lucky.

“In the near future, every object on earth will be generating data, including our homes, our cars, even our bodies,” says narrator Joel McHale in the introduction to the show. “Almost everything we do today leaves a trail of digital exhaust -- a perpetual stream of texts, location data and other information that will live on well after each of us is long gone. …  This is the story of an extraordinary revolution that’s sweeping almost invisibly through our lives and how our planet is beginning to develop a nervous system with each of us acting as human sensors. This is the human face of Big Data.”

Well, it might be “the human face,” but more in the collective sense than the individual. In this show, the talking heads who extol the virtues of our individual futures as sources of collective data talk in terms of great numbers.

“The world is wiring up a cerebral cortex, if you will, of billions of connected elements that are going to exchange billions of ideas, billions of points of knowledge and billions of ways of working together,” says one Big Data fan for whom the mobile phone holds the key to curing the world’s ills.

“A billion people in India, a billion people in China, you’re talking 500 million to a billion in Africa [and] suddenly the world has a lot more minds connected in the simplest, least-expensive possible way to make the world better,” he says. “Least expensive?” Has this guy looked at his phone bill lately?

While the majority of talking heads in this show are decidedly in favor of Big Data stepping to the forefront and taking over our lives, the show dutifully includes a handful of detractors -- perhaps so critics won’t accuse the show of being too one-sided.

The main detractor is a journalist who decries the collecting of phone data by the U.S. government. “We have constructed a world where the government is collecting secretly all of the data it can on each individual citizen whether that individual citizen has done anything or not,” this journalist says. “They have been collecting massive amounts of data through cell phone providers [and] Internet providers that is then sifted through secretly by people over whom no democratic institution has effective control.”

He makes a good point, but the government is not the only institution taking your private information and using it any way it sees fit. Google, Facebook and heaven knows who else does this too. And it should be noted that this show acknowledges all of that, while also positing that the situation has its benefits, such as when Google search patterns can be analyzed to help an institution such as the Centers for Disease Control predict a potential flu outbreak (according to one example cited on the show).

The critical comments expressed here about “The Human Face of Big Data” are not being made to steer you away from this show. On the contrary, it is a provocative show that should be watched, not dismissed.

Photo credit: Courtesy of Catherine Balet “Strangers in the light” (Steidl) 2012 / from The Human Face of Big Data