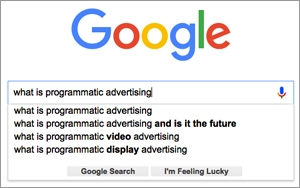 When new technology comes along, there are those who gobble up information from the beginning, and there are latecomers.

In digital advertising, lack of expertise is often seen as a significant industry pain point -- along with ad blocking, fraud and a lack of transparency.

Here are some numbers on the industry's need for programmatic training:

-- About half (46%) of agencies are “unsure” if they trust programmatic technology to execute ad buys, according to a Strata agency survey from Q2 2015.

-- A 2014 ANA and Forrester survey of 153 client-side marketers found about 40% claimed low or no understanding of programmatic buying.

It's important that people from agencies, publishers and brands learn the whole process and their role -- but as of now, a lot of folks are in the "newcomer" category.

Some are taking a head-on approach. Take Publicis Groupe, for example. After its programmatic ad buying agency Vivaki was reorganized last year, the company began a training program to educate employees on programmatic advertising. According to the Wall Street Journal, more than 800 people have signed up for the online courses, which include programmatic buying basics, ad buying tools and software demos.

Kristen Robinson, global director of capability for Starcom MediaVest Group, a division of Publicis Groupe, told the Journal that the goal is to "provide uncompromised capabilities," adding, "What we’ve seen is there is this huge spectrum of capabilities, given the speed at which these changes [in the ad industry have taken place]."

Experimenting and diving headfirst into tech is a great way to learn. You make a few (hopefully not too terrible) mistakes and begin to understand and comfortably use an interface.

With ad tech, it's not always that simple, though. Parts of the process are often siloed, and experimentation isn't really an option when proprietary tech is kept behind closed doors.

Comments, anyone? Please let us know if there are any programmatic topics you're interested in hearing about.