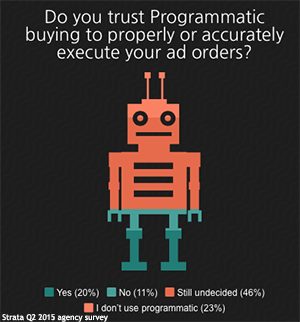 Programmatic advertising is obviously top of mind for many in the digital ad industry, but not all ad agencies are convinced the technology properly executes ad buys.

About half (46%) of agencies are “unsure” if they trust programmatic to execute ad buys, according to Strata’s latest agency survey, taken during Q2 2015. That’s a significant increase from the roughly one-third of agencies that said they weren’t sure if they trusted the tech at the beginning of the year. And 11% said they do not trust it, a drop of 32% quarter-over-quarter.

Still, these trust issues haven’t stopped some agencies from using more and more programmatic to carry out their business.

agency, media buying, programmatic, rtb
10 comments about "About Half Of Agencies 'Unsure' They Trust Programmatic".
Check to receive email when comments are posted.
Read more comments >
Next story loading