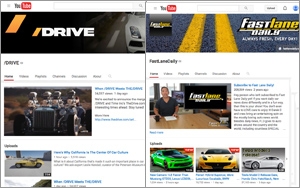 Time Inc. has been on a digital acquisition spree over the last year and shows no sign of stopping.

The channels, which boast a combined 1.9 million YouTube subscribers, will become part of the publisher’s The Foundry, a new division launched in August of last year, responsible for developing new brands and marketing programs.

Drive is currently the larger of the two properties, with 1.6 million YouTube subscribers and a library of over 1,200 videos from around the world. For its part, FLD has over 300,000 subscribers on YouTube and has produced over 2,000 reports, which have generated 200 million views to date.

The acquisition of Drive and FLD complement Time Inc.’s TheDrive.com, a newish automotive Web site launched in July of last year, which targets millennial automotive enthusiasts with a variety of editorial content, with particular emphasis on video.

Together, the properties will constitute a video-centric production network for editorial and marketing content around car culture and lifestyle.

The three auto properties will collaborate on programming for distribution across the network, as well as content for other platforms including linear TV, OTT, subscription video on demand, mobile, and other digital channels. Drive already has some experience here, having produced an original broadcast series for NBC Sports, Drive on NBC Sports, in 2014.

As noted, these are just the latest in a series of acquisitions and new launches by Time Inc.

Most recently, the publisher bought Viant, a data marketing company that also happens to own throwback social network MySpace. A week before that, it launched Motto, a new Web site aimed at millennial women looking for advice about work, life and play.

Last year, Time Inc. also launched Mimi, a new site that aggregates fashion-related content from social media and the Web, including Time Inc.’s fashion and beauty brand, as well as The Snug, a Web site targeting millennials with do-it-yourself, crafting and décor content.