Make Mine A Double: Surviving 'Kocktails With Khloe' 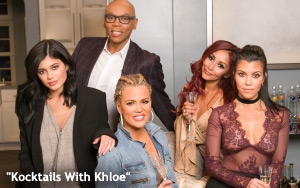 Khloe Kardashian had some good advice for anyone tuning in to her new cocktail party “reality” show this past Wednesday night.

“Pick up a drink and enjoy the show!” she exhorted at the outset of “Kocktails With Khloe,” which premiered Jan. 20 on the cable channel known as FYI. The channel -- one of the A&E Networks -- replaced the Biography Channel (also branded as just “Bio”) in 2014.

She might have gone with “Pick up a drink -- you’re gonna need it!” because that would have been more to the point. Taking this advice was the only way you could have made it through this one-hour show and its conversations about smelly genitalia, kicking people (specifically men) in that same general area, and “sharting.” Don’t know what that is? Sorry, but I don’t feel like going into it here. And anyway, that’s what Google is for.

On this Khloe Kardashian “Kocktail” hour, newly blonde Hollywood hostess Khloe has a few friends in for drinks and hors d’oeuvres “to dish on their lives, pop culture, fashion, celebrity gossip and more,” according to FYI. These topics are so prevalent on TV and social media that it should go without saying that we need another TV show to cover them like we all need holes in our heads.

While Khloe and her guests gaily traded bon mots in a living room set, Chef Sharone prepared drinks (Wednesday night’s special offering was a bourbon-based cocktail with the name “Daddy’s Home”) and food. At one point, he presented the guests with lobster rolls and roasted carrots while they engaged in a party game Khloe called “Do Me!”

In this game, Khloe asked her guests about past behaviors they may have engaged in, and if their answer was yes, they were obligated to dance. For example, Khloe asked the group if any of them had ever “kicked someone in the nuts.” And if they had, they must now get up and dance like Kid ’n’ Play. Guest David Arquette admitted that yes, he had done this, and he dutifully danced.

Another question had to do with sharting, and again, one of the guests -- a comedian named Katie O’Brien who is one of the stars of the new TV Land sitcom “Teachers” -- had no problem revealing that she had once sharted on a crowded train in Chicago. Thanks for sharing. Another drink, please.

Wednesday night’s show was one of the only episodes of “Kocktails With Khloe” that did not feature any other Kardashians as guests, according to a recap of the episode that I read on Friday morning on Cosmopolitan.com. Yes, I share your incredulity that Cosmo finds this show important enough to recap every week.

An earlier episode -- the one depicted in the photo above that accompanies this blog post -- had guests Kylie Jenner and Kourtney Kardashian, along with RuPaul and Nicole “Snooki” Polizzi. This party must have been like heaven for reality-TV fans, although in the photo Kourtney looks substantially less than pleased to be there.

As for Snooki, she was there because she has her own show premiering next week (Feb. 24) on FYI in which she and her husband Jionni (pronounced “Johnny”) flip houses on the Jersey shore (“Nicole & Jionni’s Shore Flip”).

If watching celebrities (to apply the term loosely) getting sloshed together while admitting to embarrassing past behaviors floats your boat, then by all means enjoy “Kocktails With Khloe.” And certainly, let it be said that FYI can hardly be blamed for going into business with a Kardashian.

The fact is, when a Kardashian calls up a cable network -- particularly one like FYI seeking to raise its profile – to propose that they make a show together, the answer is inevitably going to be yes.

Speaking for myself, this is the first time I have ever written about FYI, and the reason is Khloe Kardashian, for better or worse.

“Kocktails With Khloe” airs Wednesday nights at 10 Eastern on FYI.