God Save The Queen - And Proceed With Caution While Backing Up

Because stereotyping giveth as well as taketh away, one doesn’t tend to associate the English with sleaze. OK, maybe a touch of colonialism and some colorful down-market villains such as populate Guy Ritchie movies -- and yes, the odd Jack the Ripper or sadistic Jihadi John are exceptions that prove the rule -- but sleaze? Tosh. One simply wouldn’t. It simply isn’t cricket.

Not with those poncy accents and Saville Row threads and quaint addresses, like, maybe…

5A Little Park Farm Road,Solent Way,Segensworth,Fareham,Hampshire,PO15 5SJ
So charming and unthreatening, right? Oh, that second one happens to be real: a two-story office building in a seaside business park about 90 minutes southwest of London. It is the home of Justdevelop.it, a Web development firm, and many spinoff businesses including one called YesBackup.com.

That is a file-backup service, (if consumer complaints and the company’s own FAQ are any measure, a rather sketchy one) that markets mainly through native advertising and the associated intricate machinery of fake content, bait-and-switch offers and counterfeit “third-party” recommendations. I have no idea about the other Justdevelop.it companies -- Mutiny, Jessie & James, The Astoria, Gradlancer, Fortifi, Pushy, Red Lounge, Cloud Living -- but this file-protection one is built on naked bollocks. It’s actually almost entertaining how many odious tricks they pull to deceive users -- and their own affiliate distributors -- about their quality, cost and reputation.

Sifting through their various promotional gimmicks is like watching the Republican debates, the difference being that every now and then the Republicans don’t lie.

If you can even begin in this tangled Web to find the beginning, it would probably be the recommendation widgets on the Web sites of legitimate publishers, all so desperate for revenue they routinely close their eyes to the scammy, scummy and scurrilous scoundrels they often host. For instance, have a look at these exciting headlines:

How U.S. Citizens Are Protecting The Latest iPhone For Only $1
U.S. Consumers In Frenzy Over Early Christmas $1 Samsung Protection Giveaway!
Facebook Users Across The U.S. In Craze Over iPhone Protection Giveaway!
Those hyperventilating items, disguised as journalistic content, link to a bogus news site called Tech Advice, supposedly a service of Global Tech Consultants, a company name of which there are a few in the world, but not in Segensworth, Fareham, Hampshire, PO15 5SJ. Because they are not real. Nor, I suppose, is the putative author, Julie Sanders -- who if she does exist has very little journalistic scope, confining herself to insanely good file-backup opportunities for users in the UK, Commonwealth countries and the USA.

The site, needless to add, is also a Potemkin Village. It does aggregate some items from the real tech press, but only to lend legitimacy to “articles” linking back to YesBackup.com. (Or at least, they did until I started phoning them in a futile attempt to get questions answered by CEO Chris Phillips, COO Dan Short or CMO Nick Baker, and haunted their pages in a manner certain to be recorded by their servers. Suddenly those links went dead. Hmm.) Once getting users redirected to Yesbackup.com, they somehow manage to subscribe people to definitely NOT $1 cloud services.

But as I say, the dimension of the con is kind of breathtaking. The fake advice blog isn’t content to just sit there being dishonest; it takes the trouble to include comment "traffic" so bombastic as to make you wonder where they found such delighted consumers. Narnia? Shangri-La? Neverland?: 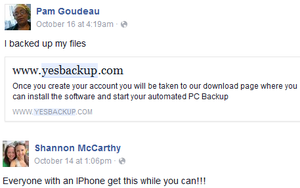 But wait! There’s more! Other dubious sites also drive traffic back to YesBackup.com. One is a supposed review site called GoodCloudStorage.net, which nominally recommends other well-known file-backup vendors, but highly recommends YesBackup.com, and feeds dynamic message reminders to that effect to anyone browsing the competition. If these jokers ever return my calls, I might even tip my cap. Of course, I’d much rather that they have to return the calls of the Federal Trade Commission. With a server in Chicago to serve the North American market of credulous file-backer-uppers, YesBackup is eligible for FTC scrutiny, and as its business practices check virtually every box in the FTC’s recently promulgated guidelines on native-ad deception, it would be a wonderful candidate for the first enforcement action.

But there is one interesting twist. These people do have solicitors. If one were to scroll to the very bottom of its Tech Advice feeder site, you’d find, in gray -- but quite large -- type, the following disclaimer:

THIS IS AN ADVERTISEMENT AND NOT AN ACTUAL NEWS ARTICLE, BLOG, OR CONSUMER PROTECTION UPDATE.
This article has no direct affiliation with Apple, Samsung, Sony, Android, HTC or any other companies mentioned throughout other than Yes Backup.
Now I would say that a sea of deception, a single, gray buoy of disclosure, however large and candid, does nothing to mitigate the chicanery. It may, however, inoculate scoundrels and emasculate regulators on three continents, as surely it is designed to do.
Meantime, to all my British friends, I hope I haven’t offended you by stereotyping you as above petty skullduggery. Please don’t get your back up. And take care of where you get your backup.
native advertising, uk
5 comments about "God Save The Queen - And Proceed With Caution While Backing Up".
Check to receive email when comments are posted.
Read more comments >
Next story loading