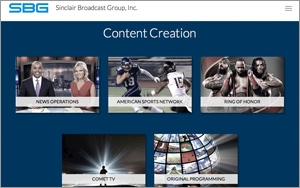 But Sinclair executives believe things will change in the coming months.

David Amy, EVP/COO, said in the company’s financial results fourth-quarter release: "We expect 2016 to be another record-breaking financial year, due to expected significant political advertising spending in the Presidential election year, growth in our digital sales offerings, and higher retransmission revenues on 60% subscriber renewals, of which we have already entered into agreements-in-principle on most.”