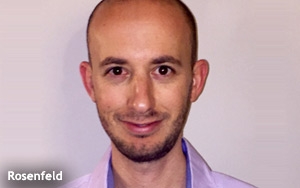 While writing an RTBlog on ad blockers last month, I tried out Stands, a Chrome extension that positions itself as the “only adblocker that lets you block ads without hurting the websites you love, and benefits you for letting a few ads through."

As noted previously, my overall experience was positive. One noteworthy plus was that I avoided retargeted ads that advertise the thing you just bought. (Why would I want to buy another bulk pack of glass cleaner so soon?) And Stands had an interesting hook: It lets certain ads through, and you can donate to a charity of your choice.

With that in mind, I spoke to Stands CEO Roy Rosenfeld about the product and the company’s goals.

Note: Stands is not currently offered in the Chrome extension store. The store found Stands in violation of Chrome’s “single purpose policy” (more on that here), and Stands is working to comply with Google’s requests, Stands CEO Roy Rosenfeld said.

The Idea Behind the Blocker

"When we try to think about building something fair to everyone, we think about users," Rosenfeld said, adding that Stands sees ad blocking as a symptom of a bigger issue: who controls the user experience.

Instead of blocking everything out, Stands allows users more control in terms of the ads they see, Rosenfeld said. After adding the extension, a user is pitched a value exchange. The intro tells users ads are like a price of entry.

After that, he said, ads can be reintroduced in a way that doesn’t hinder experience. Users choose a cause, and part of the money advertisers pay to show ads goes to the user's charity of choice. For example, "Just 30 people browsing the web with Stands can give a person clean water every single month," reads a call-to-action for charity: water on the site.

Currently, the value created by an ad is split several ways, with publishers often getting a fraction of the revenue created. Stands removes middlemen from the equation, Rosenfield said, and it gets publishers higher CPMs.

For nonprofits,  it's a stream of donation people can contribute to without spending a cent. Almost all the charities offered on the extension were suggested by users, Rosenfeld said, then Stands vets them as well.

Nonprofits are aiming for small amounts of regular revenue instead of annual or biannual donations, so the charities involved so far are excited about raising funds on the platform, Rosenfeld said.

Users seem to like the exchange, with some commenting on the added benefit of giving back to organizations. "Easy way to improve your Internet experience and help the world," said one review.

The company has talked to advertisers and agency folks, Rosenfeld said, and gotten positive responses.

"If you understand optimization and give users what they deserve, you can do something good," Rosenfeld said. "That’s kind of our goal with publishers and advertisers."

Stands launched last September after two months in private beta. So far it has seen more than half a million downloads. Currently, it has plans for other platforms and browsers, including Firefox, iOS and Android, and Rosenfeld said the goal is to sync Stands across devices.
programmatic, real-time, real-time web
1 comment about "Blocking Gives Back? Stands CEO Roy Rosenfeld Explains".
Check to receive email when comments are posted.
Next story loading