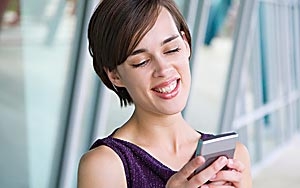 Mobile also accounted for a quarter of all email-driven revenue during the busy holiday shopping period, according to Yesmail’s study. Although desktop still brings in larger purchase numbers, mobile order values are growing at a faster rate when compared to their desktop peers.

Online desktop purchases grew by 13% in the fourth quarter of 2015 year-over-year, while mobile purchases increased by 15%.

The critical impact of mobile design to email marketing ROI shouldn’t come as a surprise.

“You obviously have to do mobile in a mobile-first world,” says Loretta Jones, vice president of marketing at Insightly, a customer relationship and project management solution for small businesses.

Yet, only 17% of marketers use responsive design in every single email sent according to Yesmail’s study. That’s a potential critical loss of customers and brand awareness considering 75% of Americans will simply delete emails if they aren’t optimized for mobile, per a Brafton study.

“No matter what device you’re looking at email on, it's still a personal communication,” says Jones. “Whether it’s a personal letter or junk mail -- it's still all about the content of the email. That’s the mechanics of the medium.”