Yahoo Teams With NHL To Stream Free 'Game A Day' 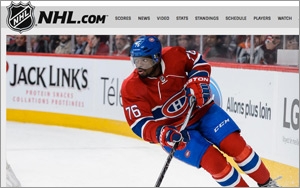 Yahoo announced Thursday it has made a deal with the National Hockey League to live stream a “Game a Day” for free, beginning March 11.

While there will be no cable subscription or authentication required, fans will only have access to that one game of the day -- up to four games a week. It must be out-of-market, meaning if the game is being played on TV at home, it will be blacked out.

Yahoo is trying to drive new advertising sales through the agreement. According to a statement, Yahoo will offer “unique advertising opportunities for brands to connect with their audiences, alongside and within this live and on-demand sports contents.”

Yahoo is introducing new video advertising opportunities that will run within commercial breaks during the live stream of NHL and MLB games.

The streams are for U.S. only and will not work on mobile.

This partnership is a follow-up to the successful NFL live stream on Yahoo, which drew more than 15 million viewers, the company stated. Yahoo is also promoting Wednesday and Sunday national NHL games in partnership with NBC Sports Group.

“The NHL’s premium content nicely complements our offering of live and on-demand partner content, including Yahoo/MLB’s Game of the Day, Yahoo/NBC Sports content and our recently announced deal with the PGA Tour,” stated Phil Lynch, VP of media partnerships at Yahoo.

But the NHL has other digital partnerships, too.

It recently signed a six-year deal with the company behind MLB.com to have their technical publishing division manage its assests GameCenter Live, NHL Center Ice, NHL Network and NHL.com, Talking New Media reports. The new venture resulted in a redesigned NHL app that launched February 1.