McConaughey To Continue As Lincoln Endorser 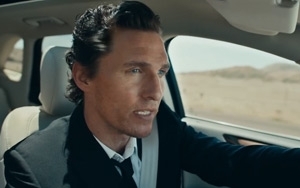 NEW YORK — Actor Matthew McConaughey, who made a surprise appearance Wednesday during the Lincoln press conference at the New York International Auto Show, said he hoped to remain the brand's spokesman for several more years.

"I am pleased to be here today as a previous and present owner of Lincolns, and I am excited to see this new concept of Navigator," McConaughey told the crowd of reporters and industry representatives gathered for the reveal. "I am happy to see Lincoln growing, and I am happy to be part of Lincoln's growth. Going forward, it looks like we are going to continue that relationship for a few more years.”

McConaughey has been Lincoln's brand spokesperson since 2014 and has appeared in both brand and product-oriented spots, as well as retail spots.

The spots have continued to generate buzz and have been parodied by comedian Jim Carrey on "Saturday Night Live” and by Ellen DeGeneres.

The latest spot, “Time To Eat,” which broke in February during the Grammy Awards, features the quirky actor having a conversation with two dogs who are sitting in the back seat while he drives a 2016 Lincoln Navigator.

McConaughey has helped to boost the perception of the brand, according to the automaker.