The IAB Wants To Help You Calculate Your Programmatic Costs 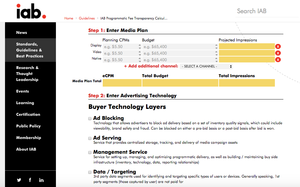 Here's how it works: The user inputs details of their media plan according to each channel, selecting any ad tech involved (such as ad serving, campaign management, targeting, pre- and post-bid evaluation and verification platform). Then the tool tabulates the overall cost of the ad-tech layers and their share of the effective CPM.

Jason White, GM and VP-programmatic revenue, CBS Interactive, and co-chair of the IAB Programmatic Council, stated that it's time to dispel the misnomer of "ad-tech tax," and "help practitioners on both sides of the fence manage and appreciate these valuable assets."

Ad tech has long been criticized as having a “black box” process that gets less transparent about costs and revenue as more parties get involved -- including trading desks, networks, data partners, verification partners, demand-side platforms, exchanges, etc.

This month, Technology Business Research (TBR) released a study estimating only about 40% of digital advertising budgets are going toward “working media,” with 31% of budgets going to technology used to process media buys, Real-Time Daily reported.

Try out the calculator here.

iab, programmatic, real-time, real-time web
1 comment about "The IAB Wants To Help You Calculate Your Programmatic Costs".
Check to receive email when comments are posted.
Next story loading