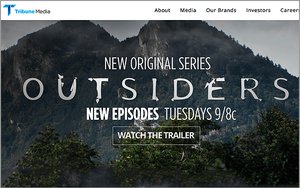 Belser said he is excited to build new content opportunities and partnerships that “extend beyond digital” as well.

Belser will be responsible for launching new editorial franchises and content experiences, as well as digital business development and talent partnerships across all Tribune Media platforms.

He will lead the creative strategy, vision, production and operation of the company's emerging national news, entertainment and sports brands.

Belser told Publishers Daily that social and mobile will remain a focus, but there will be an expanded emphasis on native experiences and products.

He added that he will be working closely with the data insights group “to refine existing programming slates and building strategies for nascent platforms. I’m also interested in content opportunities that span linear and OTT. Having access to such a varied distribution network and the ability to experiment is a unique opportunity,” Belser said.

His team is formalizing "some exciting investments and partnerships which will drive reciprocal value for all parties including yet-to-be-established Tribune brands."

Belser joins Tribune Media from NowThis Media, where he was one of the company's first employees. He served as SVP of production and creative at NowThis, a top publisher on Facebook. Belser also launched NowThis Studios, the company's in-house creative services group.

Prior to NowThis, Belser was head of production at Vice Media.

He will oversee video, social, and mobile applications as well as content management, discoverability and publishing solutions.