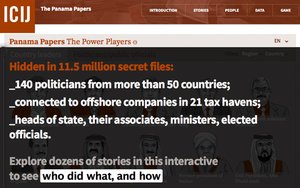 An email server hack is reportedly behind this weekend's leak of over 11 million documents from Panamanian law firm Mossack Fonseca.

The leak, dubbed the “Panama Papers,” implicates hundreds of world leaders, celebrities and criminals in potential tax evasion through the funneling of money to shell companies. At 2.6 terabytes of data, the Panama Papers dwarfs Wikileaks and is the largest leak in the history of data journalism.

The leak of the Panama Papers to German newspaper Sueddeutsche Zeitung was reportedly the result of a cyberattack on an email server.

Ramon Fonseca, director of Mossack Fonseca, revealed to Reuters that his firm had been a victim of a cyber attack and “an international campaign against privacy.”

An investigation by Forbesreveals that Mossack Fonseca has inadequate security practices, with numerous vulnerabilities reported on its main Web site and its customer portal. The portal, used by Mossack Fonseca customers to access sensitive data, ran a version of Drupal that was over three years old.

Sueddeutsche Zeitung journalists, in collaboration with the International Consortium of Investigative Journalists (ICIJ), spent a year analyzing the data before revealing the results to the world over the weekend.

The first casualty of the leak, Iceland's Prime Minister Sigmundur David Gunnlaugsson, announced he would step down on Tuesday amid reports that his wife owns an offshore company with claims to collapsed Icelandic banks.