What Did The Good People Of Dallas Do To Deserve This? 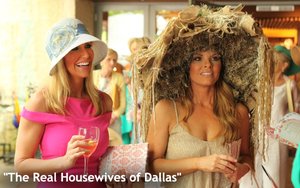 You’re the latest community to have your reputation besmirched -- if not obliterated altogether -- by Bravo’s latest expansion in its relentless “Real Housewives” franchise.

And there is nothing you can do about it. The show is already made and scheduled. It arrives this coming Monday (April 11) at 10 p.m. Eastern, 9 p.m. Dallas time.

Tune in at that time and take a look at yourselves. You will see what the rest of the world will see: A group of grasping, social-climbing, backbiting, f-word spewing harridans positioned as the cream of your crop.

The fact is, this new group is so indistinguishable from all of the other casts of the other Bravo shows that they could just name future versions of this show “The Real Housewives of Anywhere, USA.”

Of course, “USA” might be too confining for a series of spinoffs that has gone global. In case you’ve lost count, the latest tally of these “Real Housewives” shows is nine of them, according to the Bravo press site. There are “The Real Housewives of …” Atlanta, Beverly Hills, Cheshire (in England!), Dallas (as of next week), Melbourne (Australia), New Jersey, New York City (which just started a new season this past Wednesday), Orange County (Calif.) and Potomac (Maryland).

Wasn’t it only a few years ago that some wiseacre “experts” in what is known these days as “popular culture” were counting out this “Real Housewives” franchise and declaring it to be over? Apparently, the “experts” were wrong and here we are with a new group representing the flower of Texas womanhood.

In this new show, the “bad” girls are pals Brandi and Stephanie (pictured above), who look like they’re about 30, and basically live off the wealth of their husbands. That leaves plenty of time during the day for Brandi and Stephanie to visit each other at their homes and spend their afternoons guzzling “Jesus juice” (what the Texas gals call wine, apparently). They then have pungent conversations about poop and other bodily excretions and emissions.

“Stephanie and I?” says Brandi, a former Dallas Cowboys cheerleader. “When people don’t get our humor, it’s definitely like [makes hideous face]. We’ll have a little too much to drink and we’ll pee in bushes and she will fart on command and I will dance in her fart!” Brandi reports merrily in the series premiere without a hint of embarrassment. (I can’t make this stuff up, folks -- I just don’t have that kind of an imagination.)

Later, when Stephanie boasts of her farting-on-command skills, you begin to assume that a demonstration of this particular talent will soon be forthcoming, but mercifully, the hour ends without one. So much for foreshadowing!

But the conversations about this subject continue. “Brandi and I always talk about pooping and farting!” exclaims Stephanie.

To which Brandi adds sunnily: “She farts a lot!”

One of Stephanie’s small sons even gets into the act when Stephanie tells Brandi an adorable story of how she caught her cute little tyke in the backyard one day blithely picking up “dog turds” with his bare hands and tossing them into the pool. The boy then appears on the backyard patio to announce that he just peed in his pants. Aww … like mother, like son!

For her part, Brandi has two small daughters named Brooklyn and Brinkley. I believe I speak for all New Yorkers when I say: Would all of you out-of-towners please stop naming your children after this outer borough? It doesn’t make any sense as a person’s name. Maybe Brandi should have named Brooklyn Huntley; it would have gone better with Brinkley.

The rest of the Dallas “Real Housewives” crew conforms to this show’s well-established formula. For the most part, they are wealthy, statuesque, love to shop, and expend a lot of energy organizing lunch and dinner fundraising events where they start out air-kissing each other and then, after a few glasses of Jesus juice, they eventually start the finger-pointing, profanity-laden catfights over perceived slights that are the bread and butter of these “Real Housewives” shows.

After all this time and all of these catfights, it would be great if Bravo would just say no to another one of these. Or maybe some enclaves not yet invaded by the “Real Housewives” producers will be prescient enough to pass some local ordinance outlawing the show’s production in their areas. Do you hear that, Chicago’s North Shore, Philadelphia’s Main Line and Boston’s Beacon Hill? You could be next!

“The Real Housewives of Dallas” premieres Monday (April 11) at 10 p.m. Eastern on Bravo.

tv
1 comment about "What Did The Good People Of Dallas Do To Deserve This? ".
Check to receive email when comments are posted.
Next story loading