Who You Gonna Call? 'Ghost Brothers' And Their Smartphones 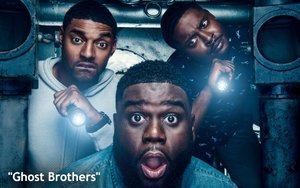 Smartphones are disrupting yet another area of our culture -- the field of paranormal investigations.

You’ll learn the surprising role that smartphones are playing in this burgeoning area of inquiry if you watch the series premiere of “Ghost Brothers,” TV’s newest ghost-hunting series premiering Friday night (April 15) on Destination America.

In the show, three African-American friends from Atlanta who dabble in ghost-hunting (they’re not real brothers) are seen visiting locations long rumored to be haunted. In the series premiere, their quest brings them to the site of an antebellum plantation in Louisiana where the long-dead spirits of slaves and their masters are said to be roaming the grounds and buildings.

The site is the Magnolia Plantation in Louisiana, a national historic site where portions of “12 Years a Slave” were filmed. At least one other ghost-hunting TV show has already visited the site -- Travel Channel’s “Ghost Adventures” -- in 2009, according to the Web site for a nearby historic town, Natchitoches, La.

Neither the movie nor the other show are mentioned in “Ghost Brothers,” which has these three “brothers” -- Dalen Spratt, Juwan Mass and Marcus Harvey -- taking a nighttime tour of slave cabins, a shed that once housed a cotton gin, a blacksmith’s shop, and a house said to be the former home of the plantation’s overseer. They don’t enter the plantation’s main house, however, because it was apparently off-limits for filming.

This is where their smartphones come in handy. Apparently, with the right app, you can record (or at least try to record) voices emanating from the spirit world. The brothers explain that they use an EVP app -- which stands for “electronic voice phenomenon,” although “electronic” is spelled “electric” every time they show an EVP graphic on-screen that is supposed to convince you that you’re listening to a ghost. This misspelling is not inexplicable, just sloppy.

They also use their smartphones for “thermal detection,” by which they can determine the presence of life forms in the dark, either warm or cold. Pointing his smartphone at the plantation house, Juwan is startled to see a cold dark mass in an upstairs window! Alas, it’s just an air conditioner.

Destination America is the Discovery-owned cable channel that was rebranded in 2012 from Planet Green, the company’s short-lived experiment in eco-programming. With a name like Destination America, one might expect a cable channel full of fun travel shows taking you to far-flung and fascinating locations around the United States.

Indeed, the network’s press Web site lists at least eight shows dedicated to ghosts and haunted buildings. The network also has a show called “Killing Bigfoot,” one of several Bigfoot shows on TV in which people search for Bigfoot and never find him (or it).

It’s the same sensation you get on these ghost-hunting TV shows, of which there have been many, even before Destination America decided to have at least eight of them.

In “Ghost Brothers,” the three ghost-hunters are pleasant enough people to keep company with. But like all of these shows, you shouldn’t hold your breath waiting for concrete proof that ghosts are really haunting the places where these ghost hunters and their film crews go exploring with their night-vision cameras.

Basically, this show -- like so many others -- consists of a brief historical summary provided at the outset about the sufferings of people who formerly occupied these spaces. After that comes the visit to these sites in which the ghost hunters venture nervously into these old, dark places to see if any ghosts will answer questions such as “Hey, is there anybody in here?”

At one point, after asking “What’s keeping you here?” of an unseen spirit, two of the Ghost Brothers hear a knock, which persuades them that they are not alone. A viewer is hardly persuaded of the presence of ghosts, however, by these mysterious knocks, assorted creaks and even the sound -- supposedly -- of footsteps upon a wooden porch. These buildings are old, so they creak and make strange noises. So what.

It’s doubtful that “Ghost Brothers” will add anything to the debate (if there is one) about the existence of ghosts. In the end, one wishes that this premiere episode had made more of this scenario in which three young African-Americans from Georgia go in search of the spirits of slaves and their masters on an old Louisiana plantation. It would seem to be a scenario fraught with great potential, but its significance is barely explored.