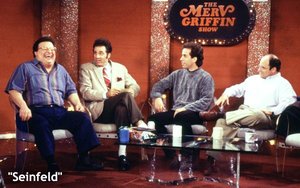 Whenever I tell people that I watch TV for a living, and after they stop laughing, the most common question they ask me is: What’s your favorite show?

And I have never really had a ready answer. Instead, I just stand there with a blank expression on my face while my brain tries to work up an answer -- any answer -- that might satisfy them.

I suspect that the reason they ask this question is because they have an elevated opinion of my expertise on the subject of television shows, and if I declare a TV show to be my favorite, then that answer might have some sort of proportional elevated value as well. This impression that they may have is debatable.

The question also seems to imply that they assume I have a favorite show in the first place. Or at the very least, they surmise that I have watched such a wide variety of TV shows in my lifetime that somewhere along the line I must have settled on one or two as my favorites.

The fact is, I don’t even really know what people mean when they talk about their “favorite show.” Does it mean they go back and watch the episodes again and again, and still find them rewarding no matter how many times they’ve seen them?

If that’s the criteria, then “Seinfeld” must rise to the top of a list of favorite shows for me, although I don’t have such a list and almost never think about the subject. In fact, the writing of this blog post represents the most in-depth consideration I have ever given to this question.

I will admit to watching “Seinfeld” repeats often and rarely tiring of most of them. But my “favorite” show? I’ve never thought about “Seinfeld” that way.

Maybe people who ask me the “favorite show” question are seeking some kind of answer based on the quality of a show, particularly with all of the provocative and critically acclaimed scripted shows that everybody talks about these days. I sometimes get the feeling they expect me to blurt out “Transparent”! Or “Game of Thrones”! Or “House of Cards!” Or “Breaking Bad”!

But for me, it doesn’t work that way. Where the enjoyment of TV is concerned, I sometimes think that half a lifetime spent as a TV critic has made me much too keen on finding a show’s faults, no matter how flawless a show might seem to most other people.

Or to put it another way: They get to enjoy watching TV, while I watch the same shows they watch with an eye toward what I am going to eventually write about them -- which often means how I am going to criticize them.

This isn’t to say that I haven’t come across some shows in my working life that I have enjoyed very much and even awarded with four-star reviews (the top rating). But I find myself almost never capable of conjuring them up when someone asks me the “favorite show” question.

For one thing, I have never thought of any of these shows as “my favorite.” Plus, I suspect some of them would be so obscure that if I did come up with them in an answer to the “favorite show” question, I would be looked upon as some kind of nut.

Here are two examples I came up with while writing this blog post: One of my favorite shows, of all the ones I watched and reviewed over the years, was “John from Cincinnati,” producer/writer David Milch’s 2007 series for HBO about a dysfunctional family of southern California surfers. I loved this show, but most people did not, and it was canceled after one season.

The best miniseries I ever saw -- in my opinion -- was “White Teeth,” the 2002 British TV adaptation of the novel by Zadie Smith. But I have a feeling that if I answered the “favorite show” question with “John from Cincinnati” and “White Teeth” at a cocktail party, I would be shunned for the rest of the evening. I suspect people want me to answer with TV shows they know and also enjoy, perhaps to validate their own preferences.

I will say this: The show that I definitely made the most ink out of, while it was on, was “The Sopranos” -- just shy of 80 bylined columns, reviews and stories about this HBO series between September 1999 and July 2007. That makes “The Sopranos” one of my favorite shows to write about, but was it my “favorite show” generally? I still can’t answer that.

Sometimes the answer to the “favorite show” question requires that you go back to the beginning of TV, or at the very least, the beginning of your TV consciousness. Although I wasn’t alive in 1955-56 during the single season of “The Honeymooners,” this show’s 39 episodes have been on TV for so long, and constitute so much of what one might call the very foundation of TV comedy, that it might come closest, out of thousands of shows, to earning the designation of my “favorite” TV show.

But how would that answer fly at the next cocktail party? A better solution to the quandary of the “favorite show” question might be this: Please don’t ask.