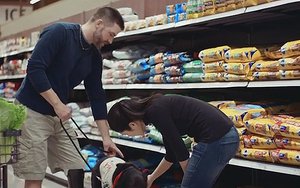 An injured veteran shows what we can learn from dogs in a film created by Pedigree as part of its “Feed the Good” campaign.

Mars Petcare created “By My Side," featuring U.S. Marine Corps veteran Dan Lasko, who sustained injuries during his deployment that resulted in the amputation of his left leg from the knee down.

In the online video created by BBDO, Lasko details his struggles in adjusting to his new life including how Wally, his new canine best friend, has spurred on his recovery.

The film, which launched April 18, will be online only on the Pedigree YouTube page. It will be distributed on various video platforms as well as the Pedigree Facebook page, says Melodie Bolin, Pedigree brand manager.

The “Feed the Good” campaign launched globally in spring 2015 and is based on the insight that dogs bring out the good in people, and Pedigree brings out the good in dogs, she says.

“By nourishing that lovable innocence in every dog, Pedigree helps feed the good that they bring to the world,” Bolin tells Marketing Daily. “In short, this video is aimed at everyone. Whether someone is already a dog owner or not, everyone has the potential to adopt a dog in need, and that is just part of our call-to-action. Pedigree has worked tirelessly to help support the transformation of shelter dogs into pets with loving forever homes with both monetary and dog food donations.”

Last year’s U.S. launch included a video with Lasko entitled “Rescued.” The video shows Lasko visiting an animal shelter where he met a dog named Maggie. He could tell that -- like himself -- Maggie had been through some tough times. After concluding the video shoot, Lasko decided to adopt Maggie. He says he felt that after all the good his therapy dog Wally brought to his life, he could return the favor by adopting Maggie and bringing good to her life.

“We are so honored to be able to work with Dan Lasko and share his heartwarming story,” Bolin says. “We truly believe people will enjoy seeing how Wally helped his healing process with everything from keeping him comfortable in large crowds to teaching him patience and how to be himself again, and how Dan paid that forward by making Maggie a part of his family in return. His story perfectly encompasses what ‘Feed the Good’ is all about.”

The “Feed the Good” campaign spans the globe with assets distributed in countries including Australia, Brazil and New Zealand. Marketing elements and commercials focus on how dogs are unconditional in their love of people, and how that lack of prejudice can be spread to their human counterparts. For example, in the U.S., a 45-second commercial entitled “The Walk” was distributed, displaying an unlikely kind moment between two very different people, brought together by their dogs.