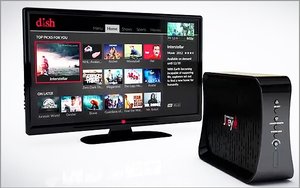 Pre-market stock activity had Dish’s stock up 4.2% -- but mid-day Wednesday trading of Dish stock witnessed it sinking 2% to $48.30.

Dish’ first-quarter revenue was up nearly 2% to $3.79 billion from $3.72 billion, with net income rising 11% to $389 million from $351 million for the same period a year before. Analysts say those profit results beat estimates.

Dish is in the middle of a battle with one of its big cable network groups that it carries, Viacom -- which may be dropped after Wednesday night, due to carriage renewal disagreement.

Todd Juenger, senior media analyst at Bernstein Research, says if Viacom is dropped it would mean “around round of massive cost cuts” at the company.

On the flip side: “It is much easier for us to believe Dish would be OK without Viacom (as long as they don't lose 15% more subscribers), but Viacom would not be OK without Dish.”

The average cost for Dish customers for the first quarter was $87.94, compared $85.73 in the same period a year before.