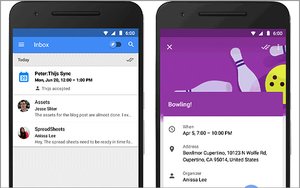 Google released a sleeker Inbox Wednesday, updating its email application by turning it into a personal CMS solution for Chrome users.

Google unveiled three major enhancements to Google Inbox that organizes web and mobile experiences via email. The release of streamlined events, and the ability to glance at newsletters and saved links seeks to minimize the time email users take sifting through clutter.

“Life can get really busy,” states Pras Sarkar, software engineer at Google, in a blog post. “It can be overwhelming to stay on top of everything. And sometimes, you might miss something really important amidst all the rest.”

A tighter integration with Google Calendar allows Inbox users to view all emails and updates for a particular event in tandem, creating a wide-ranging view of the upcoming activity in one easy-to-read location.

Inbox’s new Save to Inbox feature creates a new section in Google Inbox for all saved web pages or articles that a user may want to review again later. The technology giant also released a new Google Chrome extension that allows Inbox users to save online content via Inbox with a simple click of a button.

Google’s new newsletter feature is likely to be of most interest to email marketers, as it similarly groups all newsletters together by sender. A new preview feature also shows a short snippet of the newsletter, which can then expand to include additional details once clicked.

Google boasts more than 1 billion monthly active users on both its Chrome browser and Gmail email application, respectively, placing the company as the leading competitors in both fields.

Transitioning Gmail users to Google Inbox, however, has been a struggle and the company has yet to release updated numbers on total Inbox users.