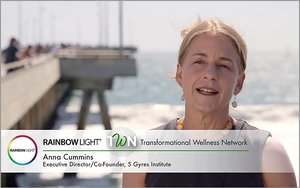 Rainbow Light multivitamin brand is launching an environmental health campaign in response to the toll plastics are taking on the ocean.

In less than nine years, there will be one ton of plastic for every three tons of ocean fish, according to the 5 Gyres Institute, a nonprofit research organization dedicated to design and policy change.

The video concept and direction was created in connection with Skycastle Media and produced by Jessen Films, and the microsite was developed by Rainbow Light’s agency of record, DHX, Portland.

“The Path to EcoGuard video is the first in a series,” Oliver tells Marketing Daily. “The second video will deal with the brass tacks of converting to EcoGuard recycled materials for consumer packaging solutions. We’re concerned about creating lasting change.”

“In the process, of course, we hope to raise awareness for Rainbow Light, a company with a long history of corporate social responsibility and a mission to directly protect and improve the health of individuals, families and our global community,” Oliver says. “One of Rainbow Light’s pillars is to be a catalyst for positive change and that’s the impetus behind this campaign.”