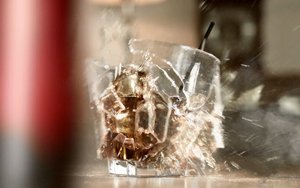 Two new television/digital ads for MillerCoors’ Redd’s Wicked Apple are ramping up the macho quotient for the brand, in a winking, over-the-top way.

The ads are intended to suggest the Wicked variety’s higher alcohol content (8% ABV) than the original Redd’s Apple Ale (5% ABV), and appeal to Millennial males with their light irony.

Earlier spots for the brand, which was launched in summer 2014, used humor to contrast the snappy, chilled experience of Redd’s with predictable choices like wine or a Bloody Mary. Message: “Some drinks are hardly refreshing. New Redd’s Wicked Apple: Refreshingly Hard.”

The new 15-second ads from Mekanism — which became the brand’s agency of record last August — use Western-movie and police-interrogation tropes to portray a tall can of Redd’s triumphing over a mixed drink.

In one ad, “Draw,” a Redd’s can on a bar flexes its apple leaves before shooting and smashing a mixed drink to bits (above).

In the second, “Scared” (below), the Redd’s can again flexes, this time before staring down a mixed drink, which wets itself on its napkin.

Both spots start with a male voiceover urging the viewer to “start boldly, with the apple that bites back,” and end with a new tagline: “Redd’s Wicked Apple: It’s About to Get Wicked.”