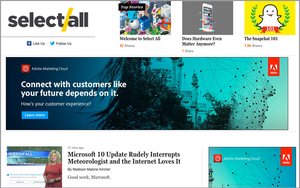 Just a week before New York magazine gets a new CEO, the publication is launching a tech vertical called Select All, run by former Gawkereditor Max Read.

Select All explores “technology as an essential part of our lives, and looking at tech the way others look at entertainment, from the point of view of obsessive fans,” the company said in a statement.

Adobe is the official launch partner.

Select All follows the strategy that developed New York’s other popular verticals, Vulture and the Cut, which were created “around readers’ passions, in the smart, playful voice that is New York’s hallmark,” the company added.

Select All will initially have five editorial staffers and publish about 10 times daily.  The vertical will publish multiple videos each day as well, targeted to a Facebook audience.

Select All technically began as a beta tech blog in November 2015, under the name “Following.”

“Select All will continue to report on the weird and wonderful ways people express themselves on the internet and social media,” Read wrote in a post introducing the vertical. “But we’ll also be widening our focus to include very personal recommendations for cutting-edge gadgets, the roller-coaster careers of the tastemakers of social media, and the ways in which the titans of Silicon Valley affect all of our lives.”

“While the tech news space is crowded, we think there’s a void of coverage for a general audience about what tech actually means to your life,” stated New York Media digital editor Ben Williams. “Following carved out new territory looking at the emotional side of our relationship to tech, and Select All will expand on that.”

As Publishers Daily reported earlier today, the launch of Select All comes just as Pamela Wasserstein, the daughter of the late Bruce Wasserstein who bought New York magazine in 2004, will replace Anup Bagaria as CEO of New York Media, which publishes New York and the digital properties nymag.com, Vulture, the Cut, Daily Intelligencer, Grub Street and Science of Us. She will step into the role May 2.

In 2016, New York Media plans to expand their video team, branded content studio, and editorial hires for Vulture, the Cut and Science of Us. Roughly 24 new positions are being added at the company this year.
facebook, online publishing, social media, twitter
Next story loading