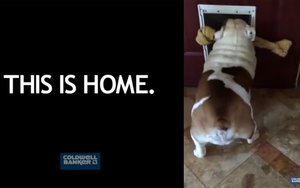 Additional consumers will have a chance to join the campaign by submitting videos and photos of the awesome moments in their homes using the hashtag #HomeIsAwesomeness. The hashtag will also serve as a home for the thousands of poignant, funny and awesome moments people share throughout the campaign.

The campaign was conceived by Siltanen & Partners, Coldwell Banker’s national advertising agency. The spots include a couple finding out their daughter is pregnant, a baby’s contagious fit of giggles, an adorable sleeping baby, and a bulldog who can’t get his giant bone through the doggy door no matter how hard he tries (watch below).

Some of the videos are viral videos, like the laughing baby video that took the Internet by storm in 2011.

“When we were talking about the concept around the office, everyone had a video they had recently captured come to mind,” Marine says. “The pregnancy announcement video is from one of our corporate employees and we’re excited we’ve been able to use it.”

The campaign is aimed at general consumers who love their homes and want to celebrate and share the awesome micro-moments that make a house a home.

"While this isn’t a new demographic for Coldwell Banker, for the first time, we are encouraging consumers to share photos and videos using the hashtag #HomeIsAwesomeness,” Marine says. “As we built the campaign, it became obvious there were just too many different awesome moments happening in the home to capture with a single campaign. People can follow the hashtag to see more of these awesome moments, and we’ll be pulling out different videos and moments to feature on our blog and social channels throughout the campaign.”

In addition to these 15- and 30-second spots, Coldwell Banker is releasing a 60-second compilation spot with three soundtrack options (Welcome Home, No Place I’d Rather Be, The House We Call Home), asking consumers to vote for their favorite on the campaign’s landing page. The ads will run on NBC and various digital channels like Hulu and YouTube throughout 2016. The spots are also on the company’s YouTube channel.

“We are reaching out to our network of 85,000 agents encouraging them to participate in the campaign,” Marine says. “We also have campaign posters and flyers to get them excited and to help promote the campaign to their teams.”