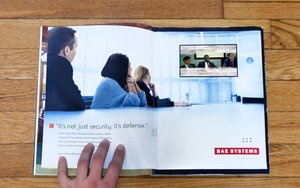 Forbes is experimenting with a unique type of cross-platform ad execution: a video player in their print magazine.

The “Video in Print” insert allows readers to watch a one minute ad titled "Moment of Truth" for Bae Systems, a business cyber defense company.

Americhip created the technology that allows the videos to play in print pages.

Cait Clegg, director of national sales at Americhip, told Publishers Daily that the video in print technology “blurs the line between digital and print media by bringing consumers paper-thin, high quality video in an unexpected way.”

Nearly 5,000 targeted nonsubscribers will receive copies with the video player embedded inside the print page. The individuals targeted include C-level executives or executives at or above the vice president level who work at companies identified by BAE Systems as “top customer prospects,” according to a Forbes spokesperson.

"BAE's message for executives is bold and well told in this video,” Tom Davis, CMO at Forbes, told PD. “The style -- almost listening in to peers' security discussion -- works well on all screens. Americhip brought the same functionality offline to Forbes magazine through this ad execution. The complicated technology was made easy, light to bind and mail, and really adds to the experience for selected Forbes readers."

The inaugural list of Forbes’ Global Game Changers features 30 of the most powerful business leaders from around the world based on corporate growth, innovation and global presence, according to a statement announcing the 2016 list, which came out in April.