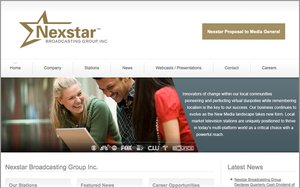 Perry Sook, chairman, president/CEO of Nexstar, says there was growth in five of its top six and six of its top 10 advertising categories.

Nexstar’s big $4.6 billion acquisition of Media General is expected to close by the end of 2016. With the deal Nexstar-Media General, the group will have 171 TV stations in 100 markets, representing 39% of all U.S. TV homes.