Cold Coffee And A Giant Bug: Notes From This Week's NewFronts 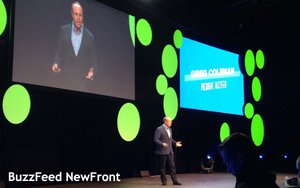 At the Hulu upfront this past Wednesday morning, the coffee was cold and the floor of the Madison Square Garden Theater was sticky (and that rhymes with icky).

Earlier in the week, on Monday, while seated in a folding chair in the front row awaiting the start of BuzzFeed’s NewFront presentation, I watched with fascination as one of those giant hard-shelled insects that you see sometimes in New York (the ones that you always think are giant cockroaches, but they’re really some other species) walked across an open area of floor in front of me. Would this brazen insect be noticed by the small circle of executive types standing nearby as it passed close by their shoes? It was not.

This was at the event space known as Moynihan Station in the old post office building across Eighth Avenue down below 34th Street. The building is awaiting conversion into a new train station, but in the meantime, this cavernous, “raw” space is being rented out for events.

My own opinion is that the place is a dump and that media companies seeking to impress their audiences of prospective media buyers (and to a much lesser extent, journalists) should avoid it. Yes, I understand that insects of all kinds can make unpredictable appearances in even the most posh settings, but all the same, this Moynihan Station place was giving me the skeeves this week.

Why bring this up? Because this is what journalists are supposed to do. We are supposed to adopt an attitude of skepticism, peek beneath the surface and ask questions (even when no one will answer them).

I admit it, we are buzzkillers -- the kind of people who get invited to a party and then complain about it later. Please let me emphasize that I am grateful to be invited to these things. And who knows -- maybe going public with certain concerns will prove constructive. And besides, where the room-temperature coffee was concerned at the Hulu event, everyone was talking about it, so it wasn’t only me.

Perhaps more to the point are the many questions I often have in the wake of these events, in which every company’s “content” is declared to be bigger, bolder and more popular with each passing year -- more visitors, more engagement, more traffic, more viewing, more time spent viewing, more this, more that. Isn’t it fantastic? If you added up all their claims, you’d probably come up with a world population in the tens of billions, all glued to their TV sets or mobile devices all day long staring at cat videos.

I bring up the cat videos because of the event I attended in New York Wednesday evening to herald the launch of the new Ellen Digital Network, a new venture from Ellen DeGeneres that intends to unify and “curate” the content on Ellen’s various digital platforms -- EllenTube.com, EllenTV.com and social media -- so that advertisers might consider them as a group.

The powers-that-be at Ellen Digital Ventures (the parent entity for her digital businesses) then announced “original” programming that consisted of video clips of cats licking babies (some people are charmed by this, but I found it gross, probably because I’m not a cat fancier). Other Ellen “content” relied heavily on video clips of wacky backyard stunts  contributed by regular people.

Another “original” show was a dance-competition show featuring talented children. Still another one featured a pair of young men whose antics have earned them a following on YouTube.

I feel it is worth reminding everyone that video clips of cute babies, cats and backyard stunts are seen everywhere these days. So are kid talent shows. During the Ellen presentation, one exec referred to this new content as an example of “storytelling.” I disagree. Random videos of cats licking the heads of sleeping infants do not constitute storytelling to me. But there I go again -- Mr. Buzzkill.

The BuzzFeed programming announcements included a show centered on a quartet of young men who call themselves “The Try Guys” because they “try” things such as dressing up as women. They too apparently got their starts on YouTube, which happens to be awash in such troupes all trying to get attention. More power to “The Try Guys” for breaking through.

As for Hulu, the tepid coffee notwithstanding, it was nice to attend an event that emphasized real, scripted original programming -- the kind that takes much more effort to produce than curating cat-licking videos. The Hulu programming -- sorry, “content” -- was so impressive, I even forgot the lukewarm coffee and sticky floors, until now.