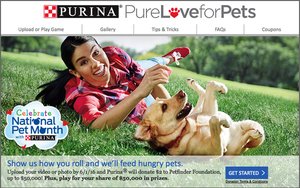 The couple encourage pet owners and lovers to take part in Purina’s “Roll Over Hunger” challenge by visiting RollOverHunger.com and uploading a photo or video of them or their pets rolling over (or attempting to).

For every photo or video uploaded during the month of May, Purina will donate $2 to the Petfinder Foundation, up to $50,000, to feed shelter pets in need.  Consumers are encouraged to share their photos and videos on social media using the hashtag #RollOverHunger.

The initiative is part of Purina’s National Pet Month activities. This is the first year Purina has initiated the Roll Over Hunger challenge, says Amy Kirkou, retail and shopper marketing manager for Nestlé Purina.

“The two previous years, Purina participated in National Pet Month with its ‘Paw It Forward’ movement that encouraged pet owners to spend more quality time with their pets, as well as take action to help pets in need,” Kirkou tells Marketing Daily.

The video featuring the Quinns is also available to view on Purina’s YouTube Channel. The entire Quinn family demonstrates how to participate in the challenge, with coaching from Alicia, whose gymnastics experience makes for the perfectly executed roll. Those at home don’t have to be an Olympic gymnast to participate in the challenge, as all attempted rolls count, even if a full roll over is never actually completed.

The initiative is being promoted via a “robust digital campaign,” Kirkou says, as well as lots of engagement on social media throughout the month of May. Those who visit www.RollOverHunger.com will receive a $10 Purina coupon through an instant win game.