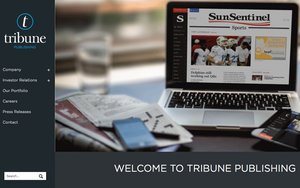 Gannett today announced that it has increased its offer to acquire Tribune Publishing Company to $15.00 per share from $12.25 per share -- a 22.5% increase.

The move comes after its initial bid was rejected and Tribune adopted a “poison pill” plan to block the offer.

Revised after Gannett met with Tribune shareholders last week, the new offer represents a premium of 99% to Tribune’s closing price of $7.52 per share on April 22, the last trading day before Gannett publicly announced its initial offer for Tribune.

The total value of the revised offer is about $864 million, including the assumption of Tribune’s $385 million of debt, according to Gannett.

Gannett’s new offer is a result of additional review of Tribune's most recent 10-Q filing on May 5, including debt, cash balance and pension liabilities, the company said Monday.

John Jeffry Louis, chairman of the Gannett Board of Directors, stated that the revised offer “demonstrates our commitment to engaging in serious and meaningful negotiations with the Tribune Board to reach a mutually agreeable transaction where Gannett acquires all of Tribune.”

The Gannett Board and management team are committed to completing a transaction “as soon as possible,” according to the statement.

Robert J. Dickey, president and CEO of Gannett, said in the statement that by not engaging “constructively” with Gannett, Tribune is “jeopardizing its shareholders’ investment and disregarding their best interests.”

Tribune Publishing, which publishes newspapers such as the Los Angeles Times and Chicago Tribune, today confirmed that it received the proposal from Gannett, which also publishes USA Today.

As Publishers Daily reported last week,Tribune adopted a poison pill to fend off a hostile takeover by Gannett after the company urged Tribune shareholders to withhold their votes for board member nominees in an election held June 2. That is in order to pressure management to “engage immediately” with Gannett regarding their bid.

The poison pill is a limited-duration shareholder rights plan, which will trigger when a person or group acquires 20% or more of Tribune’s common stock. Each shareholder will then receive a market value of two times the exercise price. The plan will expire in one year.

This rights plan would make it even more expensive for an investor to acquire a controlling stake.