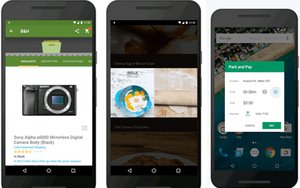 Google is testing Android Instant Apps, which, unlike most apps, require no prior installation.

Now available in limited quantities, Android users should be able to open the apps simply by tapping on a connected URL.

Suresh Ganapathy, product manager at Google, says he and his team are simply answering the call from developers for faster installation times.

“Developers tell us they wish they could bring users into their apps more quickly and easily,” Ganapathy notes in a new blog post.

To participate in the new project, developers won’t need to build new, separate apps, according to Ganapathy. Rather, they will run on same Android APIs, and the same source code.

For many developers, Google says the transition should take less than a day, but it all depends on the way individual apps are structured. Existing developer partners include BuzzFeed, B&H Photo, Medium, Hotel Tonight, Zumper and Disney.

“This is a big change, so it's going to take some time,” Ganapathy cautioned.

Across the total U.S population for adults 18 and older, smartphone penetration increased to 74% (81% of mobile subscribers) in the fourth quarter of 2015, according to Nielsen data.

During the period, smartphone owners used an average of 27.1 different apps per month, according to Nielsen.

Despite rapid evolution throughout the marketplace, including new apps -- additional device functionality and broadened device capabilities -- the number of apps used has remained relatively stable since the end of 2012.

While there appears to be a limit to the total number of apps people actively use each month, the time they spend engaging with those apps continues to grow steadily.

Since fourth-quarter 2012, the time spent per person each month has jumped from just over 23 hours to almost 41 hours -- an increase of 77%.