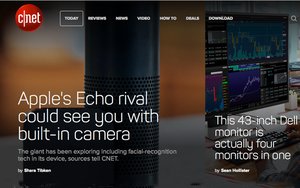 Consumer electronics media powerhouse CNET has embarked on a sweeping, yearlong redesign of its Web site, which has already introduced a number of big changes, with more new features and a raft of smaller tweaks still to come, according to the site’s vice-president for product, Jeremy Toeman.

As part of the rolling makeover, CNET has already unveiled a new look with a heavy emphasis on images and video, reflecting the Web’s broader evolution toward mobile-friendly, visual media.

The new format, designed to better accommodate the site’s growing volume of tech news and reviews, includes a grid format that presents stories with picture tiles.

As the user scrolls down, content is broken down into categories like latest stories, top reviews and top galleries. The new site also gives editorial teams more flexibility in how they tell stories, ranging from interactive charts and infographics to video and audio in the form of podcasts.

On the advertising side, Toeman said: “We basically set out on this mission to get rid of any advertising format that interrupts the user’s experience on our site, including anything that pops up, or pushes content out of the way as users are trying to read it.”

To that end, Toeman noted CNET has also introduced a major new ad format called “Powerbar,” which provides a “fully interactive, immersive, custom experience for each advertiser, which is eye-catching but not intrusive.”

In one example cited by Toeman, a large interactive ad for Tide at the top of the page was buttressed by prominent additional messaging in the form of vertical bars appearing periodically further down the page, between content categories.

Toeman emphasized that the new look and ad format are just the beginning, as CNET has adopted a start-up mentality for the redesign that entails continual testing of new products and features to emphasize ease of use.

That means new mobile and desktop features will be revamped and go live separately (rather than trying to present all the changes at once in a single relaunch).

The ongoing redesign comes amid a number of high-profile experimental projects from CNET, most recently including the debut of a “crowdsourced” sci-fi novel, as well as the launch of a print product, CNET Magazine, in 2014; a new short fiction feature called Technically Literate; and an automotive vertical called RoadShow.

On the mobile side, in March CNET launched a new app called Tech Today, providing a daily roundup of the most important tech stories.