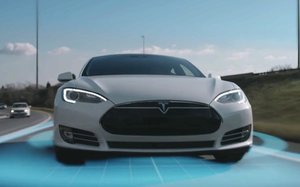 Sterling Anderson, director of Tesla's Autopilot program, recently told attendees at the MIT Technology Review EmTech Digital conference that the company can pull data from the sensors inside its customers’ vehicles to see how people drive and the road and traffic conditions they experience.

"Today, we pull in 2.6 million miles of data per day from our cars," he said, admitting that it allows the company to see things like the position of the car and what lane it drive in.

Tesla uses that data to test self-driving features, and even secretly tests new autonomous software by remotely installing it on customer vehicles so it can react to real road and traffic conditions, without controlling the vehicle, according to one report.

Telsa is adding autonomous driving capabilities to about 70,000 privately owned vehicles without asking permission by updating the software remotely. The driver must opt-in to the updates.

Google can pull data from its prototypes and General Motors can pull data from cars equipped with OnStar, but Telsa actively continues to build a development hub from its data infrastructure to test and develop technology. Google uses that data to support its self-driving cars as well as its mapping services that now serve a variety of local advertisements.

Autopilot -- which launched in 2014 -- is not fully autonomous, but it uses 12 ultrasonic sensors that provides a good view of hard and soft objects; radar and four-facing cameras to steer, change lanes and avoid collisions. The sensors and signals provide Tesla to pull high-resolution data and update the software over the air. Tesla says Autopilot is the predecessor to automation the company plans to release in 2018.

Anderson said Telsa last October released a feature called Autosteer that when combined with Traffic-Aware Cruise Control allows the car to manage safe speeds while driving in a traffic lane and adjust to prevent collisions. In January, Tesla released a feature called Summon, which allow the driver to monitor the ability to safely park the car in a garage. The car will open the garage, find its way in, and close the garage behind it. "As the technology advances we will connect the dots," he said.