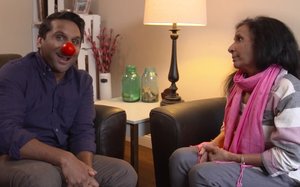 Red Nose Day is crowing about its sophomore success, raising some $32 million in its second year in the U.S. And while ratings fell for the NBC-televised special, that total represents a $10 million gain from last year, all aimed at children’s charities.

Walgreens, the exclusive retailer of the sporty red schnozzes, contributed $18 million of that total, says NBC Universal. It generated the funds for the donation through the sale of more than 10 million red noses this year, more than twice as many as last year. And for this go-round, it expanded its merchandise to include a Red Flair line, with red hats, oversized bowties and Red Noses for cars, priced from $1 to $6.

The $18 million also includes cash raised by purchases from the more than one dozen brands that partnered with Walgreens for the two-month promotion, including Coca-Cola, Orbit, Starbucks, Duracell, Planters, Old Spice, and Pringles. (Other sponsors include M&Ms and the Bill & Melinda Gates Foundation.)

While the fund-raising event has been a big deal in the U.K. for decades, American comedians and celebrities have been having plenty of fun building awareness for it here. There’s the so-not-family-friendly Sarah Silverman, spoofs from Ellen DeGeneres and friends, and plugs from the Walking Dead. Even bad guys got into the nice-guy act, with Danny Trejo (backed up by perpetual villain Steve Buscemi and Iwan Rheon, Game of Thrones’ sadistic Ramsay Bolton.)

The Chicago-based retailer also tried to build buzz for its role in the fundraising by encouraging schools and workplaces to organize fundraisers. Using videos starring actor and comedian Ravi Patel, it encouraged employees to post their own in-store videos and a 50-state sweep with a hashtag #RedNoseRoadTrip.