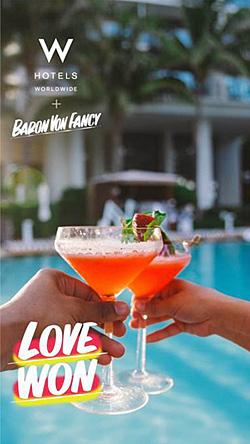 W Hotels is celebrating the one-year anniversary of the historic Supreme Court ruling allowing gay marriage with a promotion that continues its support for the Human Rights Campaign.

The hotel chain is partnering with artist Baron Von Fancy to offer guests a series of fun Snapchat filters that can be used when they post photos from the hotels. W will donate one dollar each time a filter is used through the end of the month to HRC, a civil rights organization working to achieve LGBT equality.

W commissioned Von Fancy to create three eye-catching pieces of original art in his signature bold graffiti lettering, which have been turned into exclusive Snapchat filters.

W Hotels sees guests share their gay pride from the chain’s hotels on their social media channels daily “and this effort allows them to show their support of this cause in a playful yet highly effective way,” says Anthony Ingham, Global Brand Leader, W Hotels Worldwide.

The hotel chain is a longstanding supporter of HRC and joined forces last year in the fight for marriage equality with its “Turn It Up For Change” campaign, he says.

“We are very proud to have been a part of the movement leading up to the historic Supreme Court decision and want to mark its anniversary with an innovative fundraising effort that recognizes the fight for true equality is far from over,” Ingham tells Marketing Daily.

The W Hotels x Baron Von Fancy PRIDE Snapchat Filters are available now through June 30 as location-based art overlays that Snapchatters can apply to their photos or video Snaps. This collection of filters marks the second Snapchat campaign from W Hotels, after W became the first hospitality brand to launch a Snapchat Sponsored Geofilter in 2015.

“We saw strong views and engagement on our first Snapchat Geofilters, and as a brand we focus on communicating with our customers on the platform they want,” Ingham says.

Von Fancy’s original, full-size commissioned works will be on display starting June 16 at W New York - Union Square and then head to W Atlanta – Midtown and W Austin for installations around each city’s PRIDE festivities. At each stop, W, HRC and Von Fancy will celebrate with guests and locals alike in an effort to raise additional funds for HRC. The hotel is publicizing the partnership on its website.