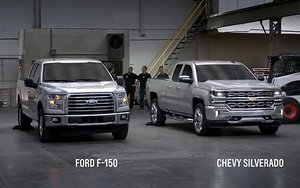 Although many media outlets have reported the campaign as being one more battle in the Chevy vs. Ford war, Sandor Piszar, director of truck marketing for Chevrolet, doesn’t characterize it that way.

“This isn’t an attack on Ford or even aluminum, as we use aluminum in many vehicles, including the Silverado,” Piszar tells Marketing Daily. “Instead, this is highlighting how we use the right material for the right application. We’ve been consistent in communicating ways the Silverado is a smart choice for truck customers who want to use their truck as a truck.”

Some comments on the YouTube page say that the video isn't realistic because anyone who buys a truck puts a mat on it.

“Actually, half of all Silverados sold do not have a bedliner when they leave the dealer, so this has very real-world implications,” Piszar says. “Further, the demonstrations are designed to show the comparison in the materials the beds are constructed with. Considering the importance of utility for truck customers, we believe the roll-formed, high-strength steel bed is a competitive advantage for Silverado.”

The roll-formed high-strength steel bed has been highlighted in previous marketing, however a featured campaign related to using the right material in the right application is a first for Chevrolet, he says.

“The level of views are an indicator of how relevant this message is to truck customers,” Piszar says. “In addition, our marketing strategy blends both paid and earned media. When presenting the competitive advantages of roll-formed high-strength steel beds in our Silverado in a compelling manner, online shares were bound to increase. We’re excited by the reaction.”

With another round of incentives on the Silverado being announced, this latest ad salvo from Chevy underscores the high-pitched competitiveness of the full-size pickup market, says Matt DeLorenzo, managing editor of Kelley Blue Book’s KBB.com.

"It will be interesting to see if Ford responds in kind," DeLorenzo tells Marketing Daily. "There's a long history of this sort of back and forth between the two brands that kind of cooled off when the market came back and both companies were selling all they could build. If sales plateau or drop, expect the hard ball to continue.”

In response to the campaign, Ford released a statement:

"When you're the market leader for 39 years, competitors sometimes try to take shots at you with marketing stunts. The fact remains that F-150's high-strength, military grade, aluminum alloy cargo box offers the best combination of strength, durability, corrosion resistance, capability, safety and fuel efficiency ever offered in a pickup. We have built nearly a million new F-150s, and our lead over the competition continues to grow."