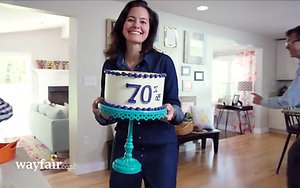 Wayfair, the e-commerce home furnishings juggernaut, is looking for new ways to get Americans excited about throw pillows and accent tables. It recently recruited its danciest employees to star in a new ad. And it’s introducing WayfairView, an augmented reality app, which helps shoppers visualize furniture options at full scale in their homes, making decorative decisions easier.

The new TV spot was written, produced and performed by employees, who auditioned by video to win parts in the song-and-dance effort. It’s airing on décor-friendly networks like HGTV, Lifetime, CBS and Hallmark.

“We have the best and brightest engineers, data scientists, marketers, analysts and merchandisers on our team,” says Nancy Go, Wayfair’s VP, in its release. “We have also discovered we have more than our share of talented dancers and performers.”

The new campaign also includes a social-media contest, inviting fans of the e-commerce company to create their own audition videos, and it will include the winners in future videos. (It’s also handing out $50 gift cards to top entries.)

With WayfairView, the company hopes the AR app, available in Google Play, will ease some of the reluctance shoppers have when it comes to buying furniture online. Developed by Wayfair Next, the Boston-based company’s R&D team, it helps people visualize everything from chandeliers to full-size sofas in their own home.

The 3-D approach will be on the PHAB2 Pro, the upcoming Tango-enabled smartphone by Lenovo, due out in September. “By digitizing our vast catalog through 3-D scanning, we will dramatically improve the visualization of products to create the best possible shopping experience for our customers,” the company says. The app then connects to Wayfair’s shopping app, to make purchases seamless.

Wayfair -- which also owns Joss & Main, AllModern, DwellStudio, and Birch Lane -- has seen its revenues soar, last month reporting first-quarter revenues jumping 76.1% to $747.3 million, and that it now has a 6.1 million active customers, a gain of 68.9%. But expenses are rising too, including the costs of stepped-up advertising. The company’s losses widened to $41.2 million, compared with losses of $27.1 million in the same period a year ago.