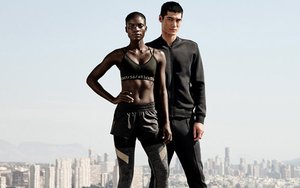 H&M is stepping up its sports game, introducing a new line of high-performance sports gear called For Every Victory.

Developed in collaboration with Sweden’s Olympic team, the fast-fashion retailer says the marketing campaign for the new line will star Olympian Caitlyn Jenner, as well as other “inspirational personalities who have all achieved their own victories, whether in sport or through life experiences.”

It is not the first such role for Jenner since transitioning to a woman, who tweeted a sneak peek at the H&M campaign back in March. She is also the face for MAC Cosmetics and its Finally Free lipstick, with proceeds going to the cosmetics company’s transgender awareness efforts. And daughters Kendell and Kylie Jenner have both starred in H&M campaigns before.

The For Every Victory campaign is also set to include Chelsea Werner, a gymnast with Down syndrome; surfer Mike Coots, who lost a leg to a shark attack, and boxer Namibia Flores.

H&M says members of the Swedish Olympic team tested every piece of the collection, with athletes advising on performance, design and wearability. The Swedish company is also the official designer of both the Swedish Olympic and Paralympic team for the upcoming games in Rio, including uniforms for the opening and prize ceremonies.

While H&M primarily competes with Zara, Topshop and Forever 21, the description of this line seems more aimed at the likes of Nike, Adidas and Under Armour, with the promise of quick-drying, breathable materials. But in a twist that’s pure H&M, the clothing, with a palette that’s primarily in black, gray, gold and dusty pink, also claims to be more sustainable, using recycled polyesters.

While the Swedish chain just posted a sales gain of 9% for May, and 5% for the first quarter, observers have remarked that its performance hasn’t been as strong as Inditex, the Spanish company that owns Zara. It just posted quarterly sales gains of a blistering 17%. Furthermore, it says expansion in the first quarter means it is now operating in 90 markets, and that it experienced growth in all regions.