It’s official. Brand content is now completely indistinguishable from non-brand content. You know, what we used to call “editorial” content. We’ve been sliding down a slippery slope for some time now, but the tipping point happened this week when The Washington Post, once one of the most venerable separators of church and state, announced “game over.” Well, the paper didn’t actually say that. It did say it had become one of the first publishers to launch branded content on Facebook Instant Articles. Huh?

I’m not sure how the deal works exactly, and I would imagine Facebook gets some kind of cut for enabling it, but here’s how the Post explains the innovation: “At The Post, we’re committed to providing superior reader experiences across the board, and that includes custom content we create for marketers,” Head of Ad Product and Technology Jarrod Dicker said in a post on paper’s 'PR Blog,' adding 'Facebook Instant Articles is a natural addition to our growing suite of tools and technology aimed at making our ads faster and more native to the platform.'”

What’s been most remarkable for me isn’t the speed of progression, it's the glee with which publishers like The Washington Post tout it as innovation.

The paper said IBM Power Systems is the first brand to publish its branded content via The Washington Post's Facebook Instant Articles.

Look at the sample rendered on a mobile phone. Tell me if it's clear to an average user that it is brand content or editorial content? But I guess that’s the point. Until the Federal Trade Commission decides to finally weigh in. 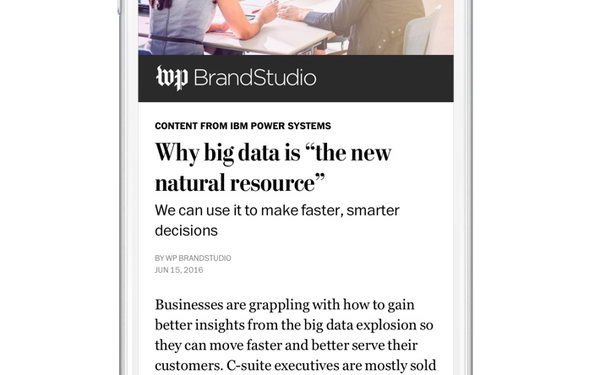