Showtime's 'Roadies' Picks Up Where HBO's 'Vinyl' Left Off 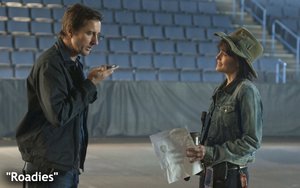 Hot on the heels of the news that broke yesterday that HBO has cancelled its own music industry drama series, “Vinyl,” here comes Showtime’s drama from the same region of showbiz, “Roadies.”

The big question: Do people really care enough about what goes on behind the scenes in the music business to support this new series? Apparently, they didn’t care about “Vinyl” in sufficient numbers to keep it alive for a second season, despite the supposed publicity value of Martin Scorsese’s and Mick Jagger’s involvement in the show, plus the tons of money HBO invested in it.

“Roadies” has a bold-faced name of its own -- Cameron Crowe, the show’s creator. He is the one-time journalist for Rolling Stone who became a screenwriter and director of movies such as “Fast Times at Ridgemont High” (which he wrote) and “Jerry Maguire” (which he wrote and directed). He also wrote and directed the rock-tour movie “Almost Famous,” which you might categorize as a precursor to this TV show, Crowe’s first TV series. His “Almost Famous” screenplay won an Oscar.

“Roadies” is about the eccentric personalities who comprise the crew that supports rock bands on tour. On the show, they’re working for a band called Staton House, which may or may not be fictional.

For example, while it’s not easy to find information about Staton House online, it’s easy to determine from a Google search that at least two other bands featured on “Roadies” as opening acts for Staton House are real. One is called The Head and the Heart and the other is called Reignwolf.

Whether or not the presence of these real bands adds to this show’s authenticity I will leave to others to determine because I have no familiarity with the world being depicted on “Roadies.”

This show does differ markedly from “Vinyl” in a number of ways. For one thing, you can characterize “Roadies” as a drama but it is decidedly lighthearted -- something you couldn’t say for “Vinyl.” In addition, “Roadies” takes place in the present day, while “Vinyl” strived to replicate the rock music business of the 1970s -- in all of its polyester-and-cocaine-snorting splendor.

The era seemed accurately depicted, but that didn’t exactly make “Vinyl” a pleasant experience to watch. While I appreciated the craft that went into the making of this show, its characters and the world they occupied was wholly unattractive. Maybe that works for a movie like “Goodfellas,” but not necessarily for an ongoing TV series. TV shows have to have a reason for people to tune in week after week. Or at least they used to.

At least with “Roadies” you have a group of people you might like enough to follow through the course of a TV series. The central characters are two of this tour’s top managers played by Luke Wilson and Carla Gugino. They’re “workplace spouses,” who spar like married people, although she’s married to someone else (who happens to work -- fictionally -- on the Taylor Swift tour crew, something that gets mentioned again and again and again)

The Luke Wilson character is single -- probably divorced. It’s possible that Luke Wilson has never played a character on screen who has not been likable and the same holds true in “Roadies.” The guy is impossible not to like.

If we were in the habit of giving star ratings in these reviews here, “Roadies” would likely earn three out of a possible four stars. Its weaknesses include several scenes and sequences in the first two episodes (which Showtime provided for preview) that seemed ill-conceived.

One had to do with a young female stalker of this Staton House band who is very effective at sneaking into concert venues and making her way all the way to the band’s dressing room. There’s a scene in the premiere episode in which members of the crew try to capture her to remove her from the building. Their efforts, which seemed incompetent from the get-go, then devolve into a ludicrous skateboard chase scene through the back corridors of this sports arena. This stalker, named Natalie, is a silly, throwaway character who should be, well, thrown away.

Perhaps “Roadies” can outlast “Vinyl” on the basis of its time frame. Certainly, the present day might prove more attractive to more people than the dark days of the 1970s depicted in “Vinyl.” Maybe it’s time for the ’70s to rest in peace.

music, tv
1 comment about "Showtime's 'Roadies' Picks Up Where HBO's 'Vinyl' Left Off".
Check to receive email when comments are posted.
Next story loading