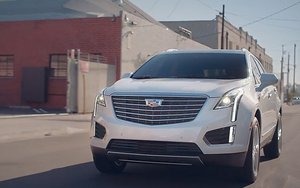 The effort is from Rokkan, the brand’s social agency of record. It pairs passionate creators from different backgrounds to collaborate and share their unique perspectives.

The campaign features the all-new Cadillac XT5 and Bryan Blue, an up-and-coming artist; Stephen Kenn, a couture furniture designer; and Jihan Zencirli, master balloon artist to the stars, and is told through
two short videos that live on DareGreatly.com, as well as on streaming video and branded content channels.

It is being supported through a content partnership with Vox Media, and will utilize Facebook Canvas, as well as Instagram’s ad Carousel (the first time the brand has used this platform’s video capabilities).

“‘Daring Pursuits’ represents the unpredictable nature and process of creativity, which has been a central theme of the ‘Dare Greatly’ brand platform since it launched in 2015,” Ray Warren, Cadillac global manager, social media and digital advertising, tells Marketing Daily. “This latest extension, ‘Daring Pursuits,’ appeals to audiences who are entrepreneurial and unwilling to settle. At the core, the campaign speaks to passion — a universal mindset that is relevant to various audiences, including Generations X and Y.”

Via Vox Media, viewers can also find the stories on sites including The Verge, Curbed and Racked. There is also a custom Daring Pursuits content hub tying the pieces all together.

“In its current form, ‘Daring Pursuits’ will run through the end of the year,” Warren says. “But we will continue to evolve the broader ‘Dare Greatly’ platform for Cadillac — from which this campaign originates — in the future.”